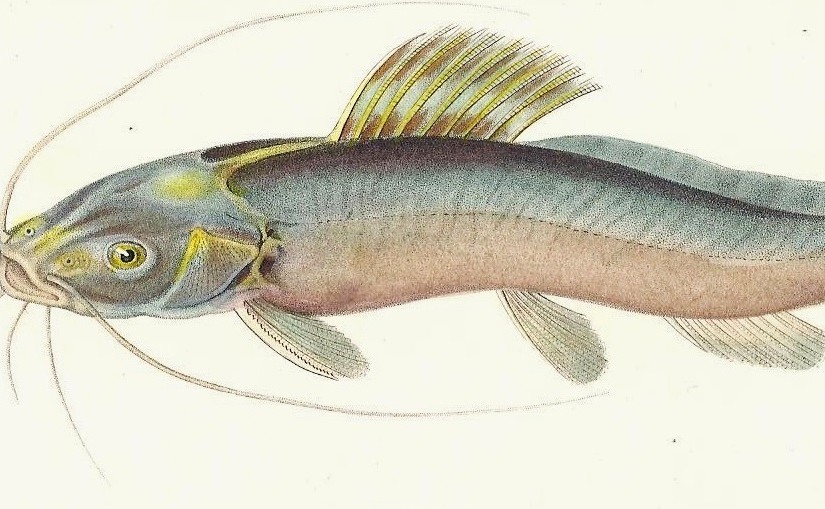 Here’s a ‘news in brief’ item which appeared in the British Medical Journal in 1863, under this headline:

A warder of the Bagne at Toulon, has just met his death in the following manner: he was amusing himself, while off duty, with fishing in the dock, when, having caught a fish about seven inches long and two broad, and not knowing where to place it, while baiting his hook conceived the idea of holding it between his teeth. The fish struggling in the convulsions of death, ended by slipping its head first into the mouth and thence owing to the viscous matter, with which the scales were covered, down his throat, completely filling up the cavity. The man rushed about for aid, but soon dropped dead from suffocation.

Extraordinary, but not unique. Four years earlier a similar case had been reported in a colonial medical journal, The Indian Lancet – this summary comes from Norman Chevers’s Medical Jurisprudence in India (1870):

In 1859, Dr. White reported the case of a strong Madras Bheestee, into whose mouth a fish had jumped while he was bathing. On opening the mouth, the tail of a large cat-fish presented itself with the body firmly fixed within the fauces, and filling up the isthmus completely.

It had entered flat, so that the fin of one side was posterior to the velum, and opened out on any attempt being made to withdraw the fish. The operation of oesophagotomy was commenced and abandoned. A piece of cane was made into a probang [probe], and, with it, attempts were made to press the fish downwards into the oesophagus. It did pass downwards, when the patient at once ceased to breathe, gave one convulsive struggle, and died to all appearance.

Not so good. But all was not lost:

The trachea was immediately opened [in other words, they performed an emergency tracheostomy], and respiration was restored. In the course of the night the man coughed up the fish, the fins having become softened by decomposition.

Nice. Nevertheless, better to cough up a decomposing fish than to die because it’s stuck in your throat.

Dr. White states that “this is by no means an uncommon accident in India. Natives bathing and swimming, which they always do with their mouths wide open,

in tanks that abound in fish, are not unfrequently brought to hospital dying from suffocation and alarm with a large cat-fish firmly impacted in the fauces. It is a coarse kind of fish, with long bony fins very sharp indeed at their extremities.”

So there you have it. Essential skills for practising emergency medicine in 19th-century India including removing unwanted fish from the windpipe.

One thought on “Suffocated by a fish”