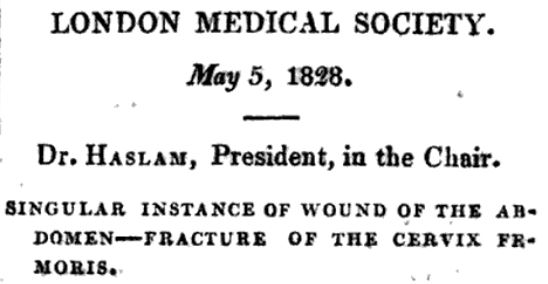 In 1828 The Lancet reported a routine meeting of the London Medical Society. It began with a memorable presentation given by William Shearly, a surgeon at the Royal Naval Hospital in Deal:

After some ordinary business had been transacted, Mr. Shearly introduced to the notice of the Society a man who had suffered severe injury to the abdomen and loss of the penis, from an incised wound. The accident occurred on board a whaler, the man slipping, owing to the greasy state of the deck, and falling forward with great force upon a large knife, used for the purpose of cutting up the blubber.

Alas, on this occasion it was not whale blubber that the knife cut.

According to the man’s statement, the penis was completely amputated, and a wound was inflicted upon the abdomen, through which the intestines protruded.

There is a lot of agony contained in that short sentence. My first thought – apart from “ouch!” – was that the ‘greasy’ deck of a whaler had presumably seen a lot of cetacean innards. It was no place to sustain a serious injury, least of all one that exposed the intestines to the outside world.

Surgical aid was immediately procured, and in the course of a few weeks he was restored to health.

It’s a shame that no more detail is given at this point: how did they repair the abdominal injury, for example? It sounds as if there was, at least, a surgeon on board. Back at the medical meeting, it was time for the assembled physicians to examine the patient:

Having stripped himself for examination, it was observed, that there was a cicatrix [scar] extending entirely across the lower part of the abdomen; the penis was closely shorn off. Several questions were proposed to the man with a view of ascertaining whether he had the power of retaining his urine, and also whether he experienced any venereal desire.

The man replied that yes, he had no trouble controlling his urination as before. As to the latter, rather prurient, question:

He said that when in the company of females he felt a desire, and was conscious of a turgescence of the small “relic of former greatness”; further, that he often had nocturnal emissions.

Remarkably candid of him. The euphemism is rather wonderful: “Are you pleased to see me, or is that just a turgescence of your relic of former greatness?”

The President remarked, that a man, who some years ago fell under his notice, had entirely lost the penis, and he was in consequence supplied with an ivory succedaneum.

Another euphemism. According to the OED, a succedaneum is ‘A thing which replaces or serves in the place of another; a substitute.’  An artificial penis, in other words.  But this ivory member was, if anything, too successful:

The fellow, however, with this instrument, was so libidinous amongst the females, that it was necessary to exclude him from a workhouse of which he was an inmate.