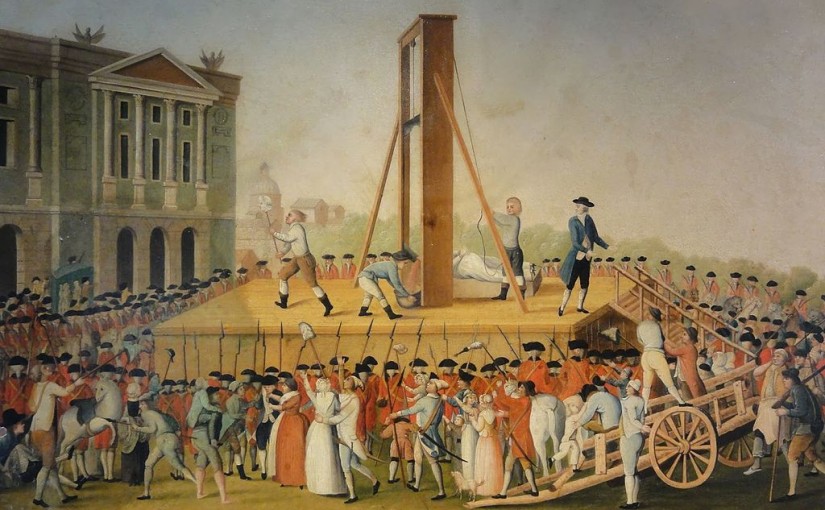 The invention of the guillotine in 1789 coincided with a dark era in French history.  The phase of the revolution known as the Terror saw tens of thousands executed by the device, which remained the French executioner’s weapon of choice until the twentieth century. The medical aspects of the guillotine provoked a number of journal articles, in particular discussing how long the body continued to experience sensations after the blade had severed the head. I’ve previously written about this interesting debate here.

In 1886 The Cincinnati Lancet and Clinic published a short report about an unusual incident which took place at a guillotine execution:

At a recent execution of a murderer in France, a strange circumstance occurred. The condemned man during his trial and final imprisonment did not evince the least fear. When, on the morning of the fatal day, he was roused from sleep and informed that his hour was come, he received the intelligence calmly. He arose, attended to his last religious duties, ate a hearty breakfast, had his ‘toilet’ made, asked for a good glass of brandy, and said he was ready to go. He walked between his attendants with a look of resolute courage, almost of defiance. But when he came in front of the ghastly instrument of death and glanced upward at it, he was noticed to blanch or turn almost white.

Bystanders noted that the prisoner suddenly became inert and ceased to engage with his surroundings:

He was lifted on the bascule, where he lay for twenty-five awful seconds before the knife fell. Meanwhile he did not stir. When the head was severed from the body it was noticed that the blood did not spurt eight or nine feet, as it usually does in such cases. When the physicians examined the body they found the heart filled with congealed blood. It is supposed that when he looked at the guillotine and suddenly turned white his heart ceased to beat. He was dead before the knife touched him. He died from fear.

Unlikely? Not necessarily. It is more than plausible that the ‘executed’ man was dead before the blade fell, but there is more than one possible cause. Stress commonly results in elevated blood pressure, and if the condemned man had an underlying condition such as atherosclerosis (hardened arteries) this might throw off a clot, causing a stroke or heart attack – and more or less instant death. The ‘congealed blood’ found in the heart seems to point to this conclusion.

But even if there was no preexisting pathology, it is not beyond the bounds of possibility that the unfortunate man was genuinely scared to death. In a paper published in 1954, the leading American cardiologist Samuel A. Levine reported the case of a 29-year-old woman who was prone to panic attacks and experienced frequent episodes of palpitations. She was thoroughly examined and found to be in perfect health – her heart was normal and she had no underlying conditions. After an exhaustive series of tests, Levine discovered something strange: if she became stressed or emotional, her heart developed an abnormally fast rhythm known as ventricular tachycardia.  VT is dangerous, as it can evolve spontaneously into ventricular fibrillation, in which the heart muscle quivers in an uncoordinated fashion, rapidly causing death unless uncorrected by a defibrillator.  Levine suggested that this is a plausible mechanism for ‘death by fright’ – the emotional response causes a rapid heart rhythm which degenerates into ventricular fibrillation, causing immediate and total cessation of the circulation.

Sixty years later this phenomenon is much better understood – we know now far more about the complex relationship between the brain and the heart, and the fact that major neurological events can result in catastrophic harm to the latter organ.  In an article published in 2007 (which you can read here), the cardiologist Martin A. Samuels shows how many types of sudden death – including death from fright, and ‘voodoo killings’ – can be explained by emotional states and their influence on the body.