Around 7,000 people in the US are bitten by venomous snakes every year. Many of these are rattlesnake bites, but thanks to modern medicine there are only a handful of fatalities. The most important breakthrough of the last century was the invention of antivenin (also known as antivenom) – a remedy made by injecting rattlesnake venom into animals and then extracting the antibodies they produce against it. Antivenin is eye-wateringly expensive, costing over $12,000 for enough to treat a single patient. If you’re unlucky enough to have to pay for your own treatment the final bill would probably be double that.

In 1852, when Dr Harvey Lindsly reported this case to The Stethoscope, treating a rattlesnake bite was more or less a matter of waiting and hoping for the best. This patient, however, received a decidedly unconventional course of therapy:

In the autumn of 1850, a carriage drove up to my door about eight o’clock in the evening, containing four or five men, one of whom requested me to come out and see a patient they had brought for me to examine. I found him fast asleep, and, as they informed me, in a state of stupid intoxication. They said that about an hour and a half or two hours before, this man was exhibiting to his fellow-soldiers, at the United States arsenal in this city, a rattlesnake which he had brought with him from Florida, when the animal suddenly thrust his head out from the box in which he was kept, and bit the man in the hand. 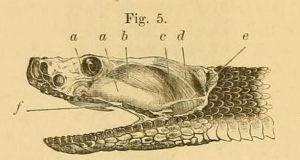 The occurrence immediately gave rise to great confusion and alarm; and the surgeon living some two and a half miles from the post, they were at a loss to know what to do. It was soon decided, however, that they should go to the nearest grocery and try the effects of alcohol. They accordingly gave him a large quantity of brandy, more than a pint, as they informed me. They then placed him in a carriage, and brought him to my house.

It’s possible, of course, that they just wanted him to die happy.

Upon examination, I found him so thoroughly intoxicated, that it was impossible to rouse him; and thinking that they had already adopted the best possible remedy for the case, I directed them to take the man to his quarters again and send for the surgeon of the post, who might resort to such local treatment as he thought best. I did not see the man again, but was informed afterwards, that though very ill that night from the effects of the large quantity of brandy he had taken, he did not then or subsequently suffer in any way from the bite of the rattlesnake.

I wonder how quickly he might have recovered without the pint of brandy?

4 thoughts on “Rattlesnakes and brandy”