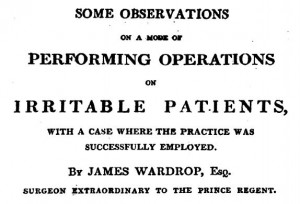 Have you ever wondered how patients in the era before anaesthetics were persuaded to undergo excruciatingly painful operations? The answer – fairly obviously – is ‘with great difficulty’. Some brave souls were able to grit their teeth and bear it, and others made things simpler for the surgeon (and themselves) by simply passing out from the pain.

Most difficult to deal with were patients who were willing to submit themselves to the surgeon’s knife but who then had second thoughts – either withdrawing consent at the last minute, or fighting off all attempts to pin them down to the operating table. This tricky circumstance was dealt with in an article published in 1819 in the Medico-chirurgical Transactions. The author was James Wardrop, a celebrated ophthalmic surgeon who enjoyed a long career, continuing to operate until his death in 1869, aged 86.

It is not uncommon to meet with persons who have diseases which can only be relieved by an operation, but whose minds are so irritable, that although convinced of the propriety of such a measure, yet when about to submit to it, their courage fails, and they wrest themselves from the hands of the surgeon and his assistants by a convulsive effort.

Naturally this was a scenario that many surgeons of this era encountered regularly – and they had strategies to deal with the situation.

The difficulty in this case can generally be overcome, by inclosing all the body, excepting the part to be operated on, either in a bag or wooden box. But patients of the former description are not so easily managed, and examples are by no means rare, where persons have suffered severe distress or even died, from diseases which they were convinced might have been relieved by a surgical operation. I remember an officer with a tumor at the angle of the lower jaw, which he himself was anxious to have removed, but when the knife was about to touch the skin, his courage failed him. After three or four unsuccessful efforts of this kind, he determined to allow himself to be tied, “hand and foot,” which, after having been accomplished with some difficulty, the incision was begun, and he then became tranquil, and the operation was easily finished. But by many, a process like this would never be submitted to; and I have heard patients who had been operated on for the stone, declare, that the binding of the hands and feet was by far the most distressing part of the operation.

A young woman of a robust form had a tumor on the orbital plate of the left frontal bone, the base of which adhered firmly to the bone, whilst the exterior portion was attached to the integuments, in which there was a small sinus leading into the interior of the tumor. The diseased mass did not exceed the bulk of an almond, but it was attended with great pain, and even cautiously touching the orifice of the sinus with a probe excited violent irritation. A tumor had been extirpated from the seat of this swelling some months previously, a portion of which adhering to the bone being left behind, gave origin to this new growth. Though she had come from a distance determined to get the disease removed by an operation, if it was considered advisable, yet when the scalpel touched the integuments she made a violent resistance. A second attempt was made, having previously secured her on a table with numerous assistants; but such was the force and exertion she made to extricate herself whenever the operation was about to be begun, that every hope of success was abandoned.

In desperation, Wardrop came up with a novel solution to this problem of a patient who wanted to be treated, but could not endure the pain it would entail:

As the only resource, it then occurred to me, that if she would allow herself to be bled to a state of deliquium, the tumor might be extirpated while she remained insensible. After a few days she submitted to this measure, and a large vein was freely opened while she sat in the erect posture, in a very warm room, in which there were seven people, with the doors and windows kept shut to hasten her fainting. No less than fifty ounces of blood were drawn before she fainted, and then a complete state of syncope came on, which lasted a sufficient time to allow the tumor to be removed.

Fifty ounces of blood is around 1.3 litres (2.3 pints): depending on her build, this may have been as much as 25% of her total circulation.

With the assistance of Mr. Young, the operation was accomplished with great facility; and in order to produce an exfoliation of the diseased portion of bone, its surface was rubbed over with kali purum.

Kali purum is potassium hydroxide, a strong base and a caustic agent now used in a variety of industrial applications. Caustics were used to burn away diseased tissue, allowing healthy regrowth. If you imagine the pain caused by lemon juice (a weak acid) on broken skin and multiply it by a thousand, you’re probably getting close to how much this would have hurt a conscious patient.

When the fainting went off, she would not believe that the operation  had been performed, until she examined her face in a glass. She suffered little from the effects of the operation, and though she remained feeble for a few days, from the profuse bleeding, yet in a week she was better than most patients are, who have undergone so severe an operation; and she rapidly recovered her wonted strength without in any way appearing to have suffered from the loss of blood.

A perfect outcome – and an ingenious means of procuring an unconscious patient, three decades before chemical agents made anaesthesia possible. But today blood loss is the sworn enemy of the surgeon, since it creates enormous risks: an unstable patient and the imminent threat of circulatory collapse. Wardrop seemed to believe that the perils of blood loss had been overstated:

The quantity of blood, which was in this instance drawn, may to some appear enormous, but I was emboldened to proceed to that extent, from having almost universally observed, that those patients recovered operations best, who lost the greatest quantity of blood; a fact strikingly illustrated after the battle of Waterloo, when it was found, that the wounded who were left in the field, and not taken into hospitals till the fourth and fifth day after the battle, recovered much sooner than those who were immediately attended to. This difference could only be accounted for, by the bleeding from the wounds being so extensive as to produce syncope; thus preventing inflammation and fever.

He does, however, concede that this is a method of last resort.

Nevertheless, it has not been my intention to recommend this mode of practice for general adoption. The result will shew, that, were circumstances equally urgent to suggest its employment, it may be ventured upon fearlessly.

One thought on “Putting a patient to sleep (without anaesthetic)”