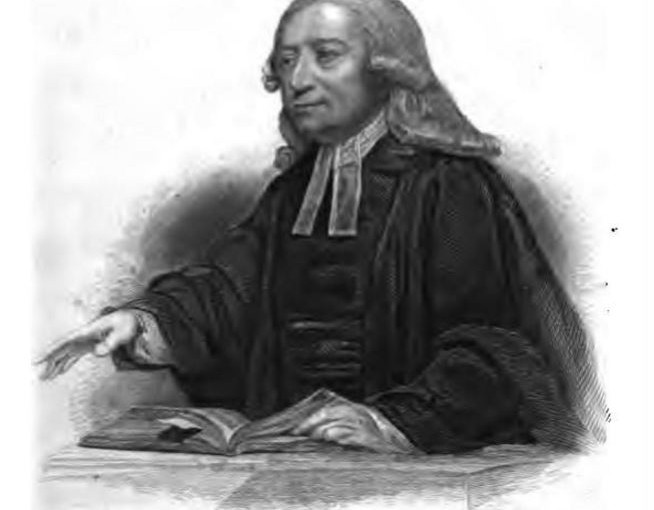 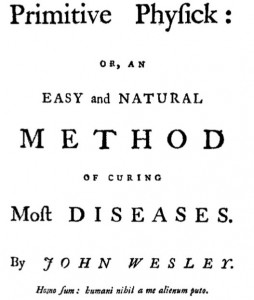 John Wesley, the founder of Methodism, was one of the most celebrated Englishmen of the eighteenth century.  He spent years travelling the country, speaking in fields and town squares and preaching his distinctive version of Protestantism, one which stressed personal holiness, charity and asceticism – though without any of the puritanical excesses of Calvinism.  One biographer estimates that Wesley travelled more than a quarter of a million miles on horseback during a lifetime of evangelism.

It’s less well known that Wesley was also an amateur physician, using his modest skills to provide free treatment to those too poor to be able to afford a ‘real’ doctor. He was an early advocate of electrotherapy, the use of electricity to treat all manner of complaints, on which he published a book, Desideratum (1759).

But his most influential medical work, published anonymously twelve years earlier, was Primitive Physick, aimed at the lay reader and containing basic advice on how to treat common ailments.  It was one of the most successful such volumes of the eighteenth century.  It was attacked by professional medics, who resented the intrusion of a dilettante into their field of expertise – but, as historians have since pointed out, Wesley based much of his text on the teachings of some of Europe’s most celebrated physicians.

Primitive Physick begins with a list of precepts for health, ‘a few plain, easy rules’, most of which he had culled from the work of Dr George Cheyne.  The first of these is certainly arresting:

The air we breathe is of great consequence to our health. Those who have been long abroad in easterly or northerly winds should drink some warm pepper tea on going to bed, or a draught of toast and water.

‘A draught of toast and water’ – otherwise known as toast-water – was water in which toasted bread had been steeped; it remained a popular drink for invalids until the late nineteenth century.

Everyone that would preserve health should be as clean and sweet as possible in their houses, clothes, and furniture.

Many of Wesley’s prescriptions have a similar homely, common-sense feel to them. This is what he has to say about food and drink:

The great rule of eating and drinking is to suit the quality and quantity of food to the strength of the digestion; to take always such a sort and such a measure of food as sits light and easy on the stomach.

All pickled, or smoked, or salted food, and all high seasoned, are unwholesome.

Nothing conduces more to health than abstinence and plain food, with due labor.

Asceticism is a recurrent feature of his writing, as is an enthusiasm for (preferably cold) water.

Water is the wholesomest of all drinks; it quickens the appetite and strengthens the digestion most.

Strong, and more especially, spirituous liquors, are a certain, though slow poison.

Coffee and tea are extremely hurtful to persons who have weak nerves.

Much of Wesley’s advice is sensible, timeless and would not be out of place in a doctor’s surgery today.  Here are some highlights from what he has to say about lifestyle:

A due degree of exercise is indispensably necessary to health and long life.

The studious ought to have stated times for exercise, at least two or three hours a day; the one-half of this before dinner, the other before going to bed.

Those who read or write much, should learn to do it standing; otherwise, it will impair their health.

In this idea Wesley was 250 years ahead of his time – ‘standing desks’ have become a fashionable piece of office furniture in the last decade.

Three preoccupations emerge strongly from Primitive Physick: the importance of piety as the prerequisite for spiritual, and hence physical health; the efficacy of electrotherapy; and huge enthusiasm for the benefits of cold baths.

Cold bathing is of great advantage to health; it prevents abundance of diseases. It promotes perspiration, helps the circulation of the blood; and prevents the danger of catching cold. Tender persons should pour pure water upon the head before they go in, and walk swiftly. To jump in with the head foremost is too great a shock to nature.

Wesley even includes a helpful list of the (many, many) conditions which respond favourably to a dousing in freezing water.

So much for his general prescriptions. The bulk of the book is devoted to specific ailments and how they should be treated. Many of these are also sensible, but others are – though mainstream for the time – less obviously scientific.  Take for instance his remedy ‘To cure Baldness’:

Rub that Part Morning and Evening, with Onions, ‘till it is red; and rub it afterwards with Honey.

Or his suggestions for dealing with ‘a Dry Convulsive Asthma’:

Juice of Radishes relieves much; so does

A Cup of strong Coffee,

Or, Garlick, either raw or preserved, or in Syrup;

Or, Tea made with Hyssop, Ground-Ivy, Daisy-Flowers and Liquorish;

Drink a Pint of new Milk Morning and Evening – that has cured an inveterate Asthma.

Use the Cold Bath thrice a Week;

Or, beat find Saffron small, and take eight or ten Grains every Night;

Or, dry and powder a Toad. Make it into small Pills, and take one every Hour till the Convulsions cease.

In any Asthma, the best Drink is Apple-Water.

Apples also feature in my favourite cure from Primitive Physick, that for ‘Raging Madness’:

Apply to the Head Cloths dipt in cold Water

Or, set the Patient with his Head under a great Water-fall, as long as his Strength will bear: Or, pour Water on his Head out of a Tea-kettle.

Glad he offers an alternative for those of us not fortunate enough to have a waterfall in the back garden. If even that fails,

Let him eat nothing but Apples for a Month.

Presumably this remedy was based on at least one apple-based cure of ‘raging madness’.  Alas I have not – so far – found a case report for a successful treatment using this method.