[with apologies to Tom Lehrer]

Articles in early scientific journals are often little more than a series of anecdotes, without experimental controls or any attempt to reach sound conclusions through quantitative means.  This flaw is particularly apparent in articles on medical subjects, where a successful ‘cure’ of a patient is often accepted at face value, without any attempt to establish whether recovery was due to the treatment administered, or whether they might have got better without any intervention.

A paper published in the Royal Society’s Philosophical Transactions in 1710, relating a series of experiments intended to investigate the action of poisons, is particularly deficient in its approach to scientific method.  The experimental method consisted largely of poisoning a large number of animals, in progressively more unpleasant and ingenious ways:

In July 1678, we gave a Dog a Piece of Bread steeped in two Ounces of Juice of Dutch Night-shade, expressed from the green Plant, and mixed with Cheese: As far as we could perceive, the Dog did not seem to receive any manifest Damage from it. The same Dose of the Juice of the Leaves of Cicuta, or Hemlock, had no greater Effect upon him; we also gave the fame Dog a pretty large Root of Aconitum Paralianches, Wolf’s-bane, together with the Leaves and Flowers of the same Plant bruised, and mixed with Flesh, which did him no Hurt.

Two Drams of Helleborus Albus or white Hellebore, disorder’d him very much, causing Reachings, Suffocations, Vomiting, and purging of Excrement; this Dog (as afterwards we often observed in others that had taken the like corrosive Medicines) whether because he was not able to endure the Pain, or by reason of any other Uneasiness, often scratched the Ground with his Feet; however he recovered, and did well again.

The dog must have been getting pretty fed up with proceedings by this point.

He also swallowed five Roots of Colchicum Ephemerum, Meadow-Saffron, dug fresh out of the Ground, with which he was violently tortured, but did not die. At last he took two Drams of Opium, which cast him into a deep Sleep, but after vomiting, and voiding fætid Excrements, he recovered by Degrees to his former Briskness; so many, and these so notorious Poisons, could not kill this Dog.

I’m sorry, animal lovers, but they really had it in for this poor dog.

Some Weeks after, when the same Dog had recovered his former Vigour, we tried on him the Force of a much stronger Poison; for we caused him to be bit by an enraged Viper three or four times on the Belly, a little below the Navel, and there immediately arose little black Bladders, containing a liquid blackish Sort of Corruption; they were flaccid and tremulous, like the Gall-Bladder when about half full, and a livid Colour by Degrees overspread all the neighbouring Parts, the Venom propagated itself with surprising Quickness, and weakened all, but more especially the animal Functions; for, notwithstanding the Diaphragm still performed its Office pretty strongly, tho’ with some Disorder, and the Heart continued beating, tho’ faintly and irregularly, yet they seemed to fare much better than the Brain, whose Strength was weakened in such a manner, that it could not perform the Functions of Sense and Motion but very faintly; insomuch, that the Dog lay without any Strength or Sensation, as if he had been seized with a Lethargy, or Apoplexy.

Feeling generous, the investigators decided to attempt to save their ‘volunteer’ by bleeding him and feeding him medicines.  After a few days he revived:

After the third Day he began to eat solid Meats, and now he seemed to be out of Danger, only some large foul Ulcers remained on that Part of his Belly that was bit, of which he would scarce have died, had he not been killed by another Dog, which prevented us from seeing the Event of this Experiment.

How careless of them.  No matter; the experiments must continue!

On the 20th of October, we injected warm into the jugular Vein of a strong lusty Dog, an Ounce of Emetic Wine; for a quarter of a Hour after the Operation was over, as he was let loose, he continued pretty well, only that he seemed somewhat dejected, but afterwards he began to grow ill, and an unusual Agitation was manifest about the Diaphragm; this was followed by a continual Vomiting, and a little after by an Evacuation of some hard Fæces.

For a time this dog also rallied, but then

we left him by himself in a warm Room, where he remained cold, and lay as if he had been dying; and in an Hour after, we forced him to take some more Broth,, which revived him again, but in a little Time, after some Agitation of his Body, he vomited, made Urine very plentifully, howled miserably, and died convulsed.

On the 18th of November, we caused a Whelp to be bit in the lower Lip, by a Cœcilia, or Blindworm, so that the Blood appeared in the Wound: The Whelp, it is true, died the fame Day, but we could not be positive whether he died (being committed to the Cure of another Person) of the Wound or not; and what increased our Suspicion was, that there did not appear on the Pare that was bit any livid Colour.

In other words, they killed a dog and learned nothing.  Except that the dog died. At this point their investigations took on a rather surreal note: 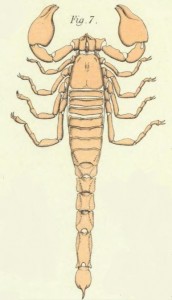 On the 3rd of January 1679, Vinegar was injected warm into the jugular Vein of a Dog, without doing him any manifest Harm. The same Day we caused a Whelp to be stung by several Scorpions, but the Wounds being but slight, and not penetrating deep, we made a small Incision on the Abdomen, and drawing the Skin aside, let the Scorpions make several Wounds on it, but without any Effect, though we often forced the Sting into the Wounds, and pressed the Bladder that is supposed to contain the Venom: In like Manner, a Pigeon, being stung several Times by a Scorpion, remained unhurt.

This is starting to sound like the sort of ‘experiment’ that small boys like to conduct on ants with magnifying glasses.

The same Day we included a Rat in a large Glass with a Scorpion; but the Scorpion being dull, and benumbed with the extreme Coldness of the Weather, could wound the Rat but very weakly, with which, however, the Rat being provoked, set upon the Scorpion and gnawed off, and devoured part of him, keeping his Eyes shut all the while, that he might not be hurt by his Claws, or Sting: The same Fate happened to another Scorpion, which we added to the former but the Rat still remained unhurt.

And it’s not just dogs they tortured:

The same Day we injected warm into the crural Vein of a Cat, fifty Grains of Opium dissolved in an Ounce of Water; the Cat presently after the Injection, seemed very much dejected, but did not cry, only made a low, interrupted whining Noise; after this followed lowed Tremblings of her Limbs, convulsive Motions of her Eyes, Ears, Lips, and almost all the Parts of her Body, with violent Convulsions of her Breast; sometimes she would raise her Head, and seem to look about her, but her Eyes were very dull and deadish; and though she was let loose, and had nothing tied about her Head or Neck, yet her Mouth was filled with Foam, or Froth in such a Manner, that she was like to be suffocated; at last, her convulsive Motions continuing, and being seized with a stretching of her Limbs, she died within a Quarter of an Hour after upon opening her Body, we did not find the Blood much altered from its natural State.

We injected into the crural Vein of a Dog, five Ounces of a strong white Wine, which made. him very drunk, and little different from what a less Quantity of Spirits of Wine would have done; but in a few Hours his Drunkenness abated, and he recovered.

By the end of the paper (there’s much more of this stuff; I’m being selective) the experimenters appear to be getting desperate:

July the 12th, a Mole being stung in the Side by a Scorpion, died immediately convulsed. By this Subject we observed, that the Cæcum is wanting in Moles.

And that, ladies and gentlemen, is how we know that moles don’t have a caecum.