In 1849 Mrs Charlotte Winslow of Bangor in Maine invented a medicinal product for children which was as successful in its day as Calpol is now.  Any comparison must, however, end there. 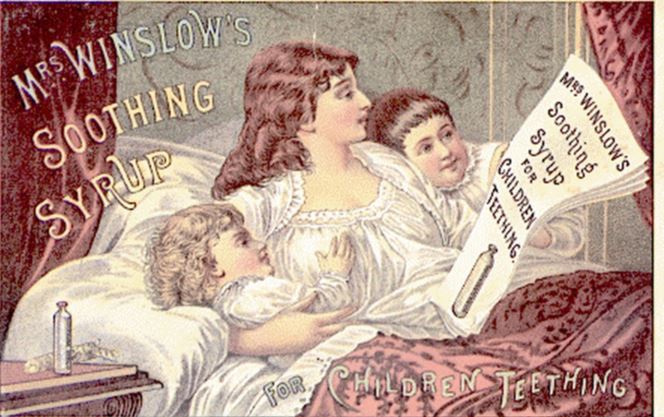 ‘Mrs Winslow’s Soothing Syrup’ was marketed as an effective analgesic, to be given to teething infants and older children with indigestion.  A contemporary advertisement declared that ‘it is perfectly harmless: it produces natural, quiet sleep by relieving the child from pain, and the little cherub awakes as bright as a button.’  The ‘natural, quiet sleep’ was achieved by the inclusion of large quantities of morphine – the active ingredient of opium – a highly addictive drug, and deeply unsuitable for small children.  Nevertheless it was hugely successful, sold widely in the US and Europe, and was the subject of a high-profile legal dispute two decades later when Mrs Winslow’s son-in-law attempted to sell a rival product under a similar name.

In 1872 The American Journal of Pharmacy published a damning article which called for the product’s withdrawal, written by a Dr McNutt of San Francisco.

On the 7th of February, Mrs. W. came into my office with a child five months old in her arms, which, she said, was very sick; that it slept constantly, and would not nurse or move for several days. The child was breathing heavily and its pupils were closely contracted. I asked if the child had been taking opium; she replied that it had taken nothing but soothing syrup. She said that on the 5th, two days before, the child was restless and its bowels costive, and that a neighbor had advised her to give it a teaspoonful of soothing syrup, saying it was excellent to regulate the bowels. (She had previously given the syrup in small doses.) She administered the syrup twice during the day, a teaspoonful each time; the child slept heavily all night, and would not nurse when roused. Not suspecting the syrup had anything to do with its sleeping, she gave on the 6th, at different times, three teaspoonfuls more. The child refused to nurse when roused. On the 7th she gave it another teaspoonful, before bringing it to my ofiice. I told her that the child was poisoned by morphia, of which soothing syrup contained a large quantity. The mother was surprised and alarmed, and had had no idea that there was morphia in soothing syrup.

Given the cause of this condition, the prescribed treatment does not sound very much better for a small child:

I ordered brandy and coffee, the bowels to be kept open by injections, and the child to be kept awake as much as possible. The child recovered, but was not able to nurse until the 10th. This is but one of the many instances of poison by this nostrum.

Dr. R. S. Maxwell, my partner, was called to see a child five weeks old, to whom half a teaspoonful of soothing syrup had been given a few hours previous. The child was already past all help, and died in a few hours. No other medicine had been given.

We may add that there are very few children at the age of six months, who would not be poisoned to death, were they to take the syrup as directed, (namely: six months old and upwards, one teaspoonful three or four times a day until free from pain,) unless a tolerance of the drug be induced by its previous administration in small doses. The morphia in a teaspoonful of soothing syrup is equal to about twenty drops of laudanum. Here we have thousands of mothers and nurses, ignorant alike of the ingredients and the effects of this deadly nostrum, directed to give a child six months old morphia equal to twenty drops of laudanum, while a physician would not. dare to give a child of that age more than three drops.

Dr McNutt points out the scale of the problem:

If the babies of this State consume two hundred thousand ounces of soothing syrup, it is but fair to assume that there is seventy-five times that amount used in the whole United States, which would make 15,000,000 ounces of syrup, or about 14,000,000 grains of morphia. Setting aside the direct cost of this nostrum, it would be scarcely possible to estimate the damages which the people of the United States sustain indirectly from its use.

He concludes by wondering whether Mrs Winslow’s Soothing Syrup might in fact be a ‘gateway drug’:

How much the early resort of our youth to tobacco and alcoholic stimulants is due to the previous use of the opium contained in this nostrum is probably not realized. But, that it has much to do with it, any one can believe, who has seen with what avidity the opium eater, when deprived of his opium, will fly to alcohol, ether, hashish, tobacco, or anything that will lull the eternal craving of the appetite for something, other than wholesome food…  But a still graver question presents itself, namely: How much of the physical disease, of the drunkenness, of the degradation and of the vice, and how many of the weakened intellects, are due to the use of the soothing syrup in infancy? Probably enough to make it a wiser Legislature that will prohibit the manufacture of any nostrum for children which contains opium, than the Legislature that passes a prohibitory liquor law for the benefit of its adults.

In 1911 the American Medical Association published Nostrums and Quackery, an attempt to warn the public about products it regarded as unscientific and dangerous.  In a chapter entitled ‘Baby Killers’ it detailed a further four examples of deaths caused by ‘normal’ doses of the Soothing Syrup.  This seems to have been the beginning of the end for Mrs Winslow’s creation.

Postscript: an early and obscure work for wind quintet by Edward Elgar, composed in the 1870s, has the title Mrs Winslow’s Soothing Syrup.  Off the top of my head I cannot think of another work by a major composer named after a proprietary medicine.