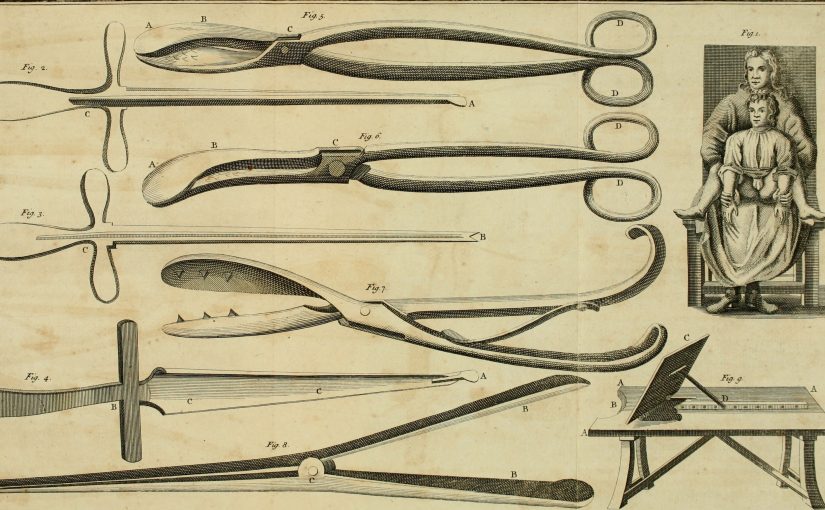 This fascinating case report was published in the Philosophical Transactions in 1701, contributed by a distinguished Dublin physician, Thomas Molyneux. It is notable both for the unusual nature of the injury, and for the remarkably sophisticated surgery that followed.

Ms Blake was ‘sanguine’ in a particular medical sense. Since antiquity, most doctors had believed that disease was the result of an imbalance between four bodily fluids or humours (blood, phlegm, black bile, yellow bile). In the Middle Ages, medics started to classify their patients into one of four groups known as ‘complexions’ or (later) ‘temperaments’. A sanguine complexion was supposedly the consequence of an abundance of blood – and associated with character traits including courage, optimism and amorousness.

…whilst in her father’s house in Fishamble Street, Dublin, was much troubled with an hoarseness last winter…

Fishamble Street is the oldest in Dublin – and famous today as the site of the first performance of Handel’s Messiah in 1742.

…for which she was desirous to take a vomit, but her friends not consenting to it, she endeavoured to provoke one, by thrusting her finger into her throat on January 5th 1694.

Not recommended, particularly for a condition as minor as a sore throat. The attempt did not work, so the young woman resorted to more dramatic means:

She drew an ivory bodkin of four inches long out of her hair, and thrust the small end forward into her throat, upon which she heaved so often as put her out of breath, and obliged her to stand upright to draw some air, which she did without taking the bodkin out of her throat, and at that instant it slipped out of her fingers, and passed into her stomach.

An unfortunate mishap. The word ‘bodkin’ has many uses, but in this context it simply means a hairpin.

The accident put her into some fright, but that soon went off again, because she found no immediate inconvenience.

Nevertheless, the poor woman spent a restless night worrying about what mischief the swallowed bodkin might cause.

The next day which was Sunday, the sixth of January 1694, about noon, she felt a sharp pricking pain in the right side of her belly, lower than the navel. However, she got out of bed, and walked a little about. Towards evening she felt the pain nearer her right groin than before, which hindered her from walking, and obliged her to betake herself again to her bed, where she lay restless all that night, by reason of the excessive pain.

The following afternoon a local midwife, Mrs McGuennis, examined Dorcas and told her that she could feel the end of the bodkin, apparently inside her intestines. A second midwife confirmed the opinion of the first, but since Dorcas did not entirely trust their expertise she sent for a surgeon, Thomas Proby. This is how he describes his first examination of the patient:

In searching her by the anus I could not find it but putting my finger into the vagina uteri, I felt the bodkin; and because she complained of a difficulty in voiding her urine, I made use of my catheter, and felt it, as I conceive, in the bladder; but immediately trying a second time, I could not find it, which made me dubious for some time what to do.

A strange situation. If the bodkin really was in the bladder, the only way it could have got there was by perforating the bowel – a serious injury that might cause catastrophic infection. The surgeon called upon some heavyweight colleagues: two of the most eminent physicians in Ireland.

Within a fortnight after, in the presence of Dr John Madden, the very worthy President of the King and Queen’s Royal College of Physicians in Ireland, and Dr Thomas Molyneux, a Fellow of that society I did convey a catheter into her bladder, where the bodkin was at that time very plainly to be felt. She then had as well as all the time, such an excessive pricking pain at voiding her urine, that she was often constrained to hold it much longer than she would, which made her earnest that the bodkin should be brought away at any rate; whereupon I resolved to endeavour to extract it after the same manner as I do stones from women.

Mr Proby intended to remove the bodkin as if it were a bladder stone. The method he had in mind did not involve an incision; instead, he would simply insert a pair of forceps into the woman’s bladder via her urethra. This early example of a minimally-invasive surgical technique was one which Mr Proby had himself pioneered.

Accordingly (her body being duly prepared for the operation) about ten days after, the aforenamed physicians being present, I did attempt the extraction, having introduced my forceps into the neck of the bladder, I very readily took hold of the bodkin, but could not move it.

It was evident that the bodkin was not loose in the bladder, but embedded in one of its walls. The surgeon then passed a finger into the bladder to see if he could dislodge it, but without success.

I often seized it with my forceps, but found it impossible to remove it by reason of the position, which was the smaller end, resting upon the inside of the ischium (as I imagine) which probably occasioned her halting.

The ischium is the lowest part of the pelvic girdle, one of the bones that make up the hip. ‘Halting’ means ‘limping’; the surgeon was probably right in assuming that this was what had caused the patient’s discomfort while walking.

Realising that the bodkin was too firmly lodged to be removed by this method, Mr Proby abandoned the procedure and decided to try something else. Rather than use forceps he would have to perform open surgery.

Finding all my attempts to be fruitless, I despaired ever to effect it this way, which made me desist from farther trial for some time: but now the weather being more favourable, and her pains increasing, notwithstanding that she was frequently informed of the danger of the operation by the physicians and me, yet by her daily importunity I was prevailed upon to attempt the extracting of it in the manner of the higher operation for the stone.

The operation to remove a bladder stone, known as lithotomy, has been practised for thousands of years. The usual procedure in the seventeenth century, known as the Marian operation, was a brutal and painful affair that entailed making an incision in the perineum, the area between the anus and vulva. But here Mr Proby refers to an alternative which he calls the ‘higher operation’ – using an incision in the lower abdomen. This presents us with an interesting historical conundrum, to which I shall return.

Dr Madden, Dr Molyneux and Dr Smith, Fellows of the aforesaid College, being present, having placed her in a convenient posture, I put my finger into the vagina uteri, and felt the bodkin lying close to it on the outside, whilst I held my finger there I pressed with my left hand above the os pubis [pubic bone], where I felt the head or thickest end of the bodkin.

Mr Proby then removed his right hand, and asked his colleague Dr Smith to place his own hand inside the vagina instead. Dr Smith pressed hard against the bodkin to keep it steady, while the surgeon made an incision along the edge of the right abdominal muscle, the rectus abdominis. This exposed the bladder.

A bistoury is a surgical knife or scalpel. Sure enough, the bodkin had lodged with one end protruding through the bladder wall – the patient was lucky that this had not caused an infection. Still more remarkable, she made a complete recovery from what was, by any standards, major surgery.

I dressed the wound and put her into bed, and in less than a month, by God’s great blessing, she was perfectly cured, and as free from any inconvenience, occasioned by swallowing the bodkin, as ever she was in her life.

The surgeon realised that this was a case of some significance, since (most unusually) he decided that he needed proof of what had happened. This comes in the form of sworn witness statements, the first signed by the medics:

We, the physicians under-named, do hereby certify, that all the particulars of the Chirurgical operation of extracting the bodkin out of the bladder of Dorcas Blake, as contained in the foregoing account, are truly and faithfully related, it being performed by Mr Thomas Proby, Master Chirurgion, with great skill and success in our presence, as witness our hands, this 22nd of May, 1695.

The patient was also asked to make a statement, which she did under oath and in the presence of the Mayor of Dublin. She was evidently illiterate, for she signed her statement with a cross.

Dorcas Blake, of Fishamble Street, in the parish of St John Spinster, came this day before me, and being sworn on the holy Evangelists, saith that the above relation is true in substance, and that she did swallow the bodkin therein mentioned, and that the bodkin now showed to her is the same that she formerly swallowed.

The report concludes with a drawing of the bodkin, and an explanatory note:

The bodkin was cut out of her bladder that day nine weeks that she swallowed it. There was but half of the bodkin in the bladder, which was incrusted with a gravelly calculous matter, as appears in the adjoining figure.

The section marked A to B was sitting inside the bladder, since it was covered in a thin crust of minerals deposited by the urine; B to C was protruding into the tissues outside the bladder, with the sharp point resting against one of the bones of the pelvis.

It’s a pretty remarkable case, and an impressive feat for a seventeenth-century surgeon. But there’s one detail that intrigues me. Mr Proby eventually succeeded in removing the bodkin using what would now be called a suprapubic approach – through the abdominal muscles just above the pubic bone. It is clear that this was a procedure he was already familiar with, since he writes that ‘I was prevailed upon to attempt the extracting of it in the manner of the higher operation for the stone’.

But according to most historians, the ‘high’ or suprapubic approach did not enter the surgical repertoire until twenty years after this operation took place!* The surgeon usually credited with its development is John Douglas, who first performed his ‘New Operation’ in December 1719. It should be said that several surgical writers of the preceding century (including the great Hildanus) had described the suprapubic approach, but the historical consensus appears to be that the procedure was rarely, if ever, attempted. I suggest that Mr Proby’s evident familiarity with the technique indicates that it was performed earlier, and more often, than hitherto suggested. But I may be wrong; as ever, please feel free to leave a comment below.

*Pedantic note: the Provencal surgeon Pierre Franco performed the ‘high’ operation as early as 1561 to remove a bladder stone ‘the size of a chicken’s egg’ from a two-year-old; but this was done in desperation and he decided the procedure was too dangerous to repeat. It was subsequently described and practised on a cadaver by the French surgeon Francis Rosset in 1590, but he apparently never attempted the technique in living patients.