This case, reported in the Annals of Surgery in 1907, has one of the best patient histories I’ve ever read. The medical literature is packed with examples of people swallowing indigestible objects, but this example is surely one of the most extraordinary. The narrator is Arthur E. Benjamin, a surgeon from Minneapolis:

This paper deserved to be published for that sentence alone.

Has eaten glass for 20 years and it never troubled him until February, 1906. Has swallowed 8- and 10-penny nails and horseshoe nails for the last five years; a few were passed in stools. Has swallowed pieces of glass as large as his thumb. Mouth has been cut several times, anus cut once. Stools have been black only during the last five or eight months.

Black stools can indicate bleeding in the upper gastrointestinal tract. Not a good sign, particularly if you eat glass for a living.

Drinks a gallon of water at a time in one minute. Has drunk 40 gallons of water in a day. Four years ago had a hemorrhage from stomach after drinking 12 gallons; bled about one pint.

He drank ninety-six pints of water in a day? The stomach’s capacity for expansion is legendary, but that sort of volume is beyond even its powers. No wonder he was injured; he’s lucky he didn’t bleed to death as a result.

Is a contortionist, eats fire and is a strong man. His last attack came on while in St. Louis, five weeks ago. He was on the street when he was taken suddenly with severe pain across stomach and in region of heart. Was taken to hospital in St. Louis and remained there three weeks until he came here, two weeks ago. Was fairly well until two days ago when he was taken again and laid up in bed for a couple of days.

His symptoms do not sound particularly pleasant:

Patient vomits considerable matter of a black color, which tastes like iron rust. Stools are of a black color. Has a feeling of weight in his stomach. Has lost about 25 pounds in weight in the last five months. Has not lost strength at all, but is shortwinded. It hurts him to breathe,  especially to do deep breathing, which produces the sensation of a knife cutting in his stomach. There is a constant steady pain which becomes worse at times. Says that he can feel objects in his stomach at times.

The summary of his habits might best be described as eclectic:

Uses tobacco moderately, has been an inveterate drinker until eight months ago, since which time he has drank no alcoholics. Appetite and sleep good. Bowels are constipated. Patient is well nourished, muscular; bends with his teeth an iron rod 94 inches in diameter. Straightens out horseshoes, breaks rocks with his fist. Tongue not coated or scarred, of good size. Upper lip shows scar to right of median line. Eyes normal. Two fingers are gone from left hand.

The doctors also obtained a family history, which often provides information useful for diagnosis. When your patient has swallowed an immense quantity of glass, on the other hand, it probably isn’t going to have much bearing on the case.

Father died at 65 years of stone in bladder. Mother died at 75 of cancer of stomach. Two brothers well, two dead – one of blood poisoning at 49 years, one of consumption and Bright’s disease at 39 years. 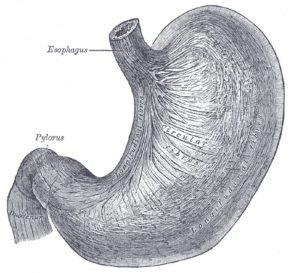 The doctors decided that surgical intervention was necessary, and on June 13th 1906 Dr Benjamin operated. After opening the abdomen he found the stomach greatly dilated and decided to perform a gastroenterostomy – a procedure in which a new opening is created between the base of the stomach and the small intestine. When Benjamin opened the stomach with his scalpel he had a surprise:

Fifty-two nails were removed through the opening made. Some of them were as small as shingle nails, but most of them 6- 8- 1o- and 20-penny nails removed from sacculated cardiac end of stomach. These were in various stages of erosion, two being like darning needles. Also 5 pieces of thin glass removed. The nails were in bunches and a number of them imbedded in the stomach wall and surrounded with exudate, making their removal more difficult and accompanied by some haemorrhage.

The stomach was in an extremely poor condition: parts were ulcerated, the walls were thickened and fragile, making it extremely difficult to place sutures without tearing them.

This patient did not vomit after the operation. He made a rapid convalescence, and on the fifth day insisted on eating solid food. On the seventh day he was out of bed, as he declared himself well. On the ninth day he could not be persuaded to stay in the hospital longer and went home. The following day he was around town looking for a job, and on the twelfth day he called at my office demanding the nails, as he stated he had a chance to make $5 that evening by exhibiting the same, and was only persuaded to leave without them by the loan of a dollar, to pay board, as he said.

It seems a bit much to deny him his nails. Surely they belonged to him? Maybe the surgeon was worried that he’d swallow them again.

He stated since leaving the hospital he was eating regular food and felt well. Four days later, while in a neighboring city, he was seized with severe pains in the stomach. He was taken to a hospital and kept quiet for a few days when he was out again. He has since called at my office stating that he had suffered occasionally but was comparatively well.

Attached to this remarkable report is photographic proof of the unusual stomach contents. See below (and click to enlarge): 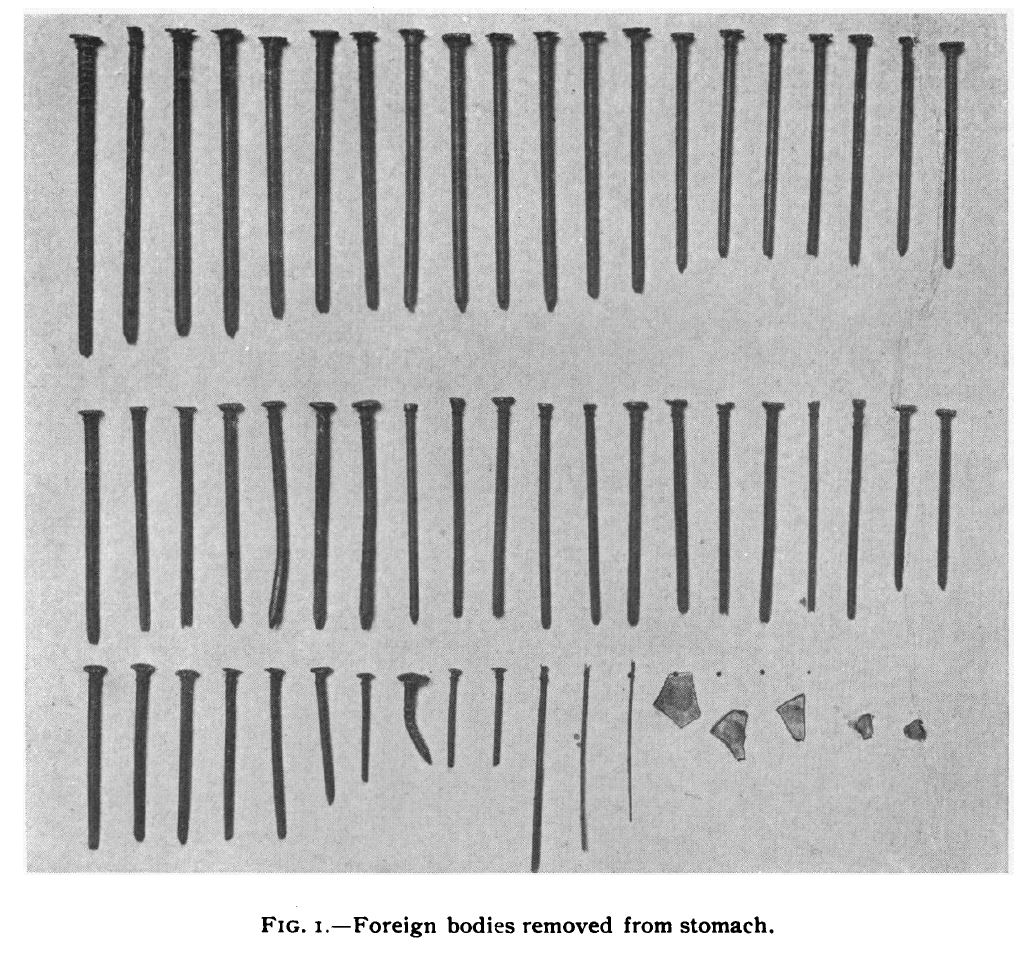