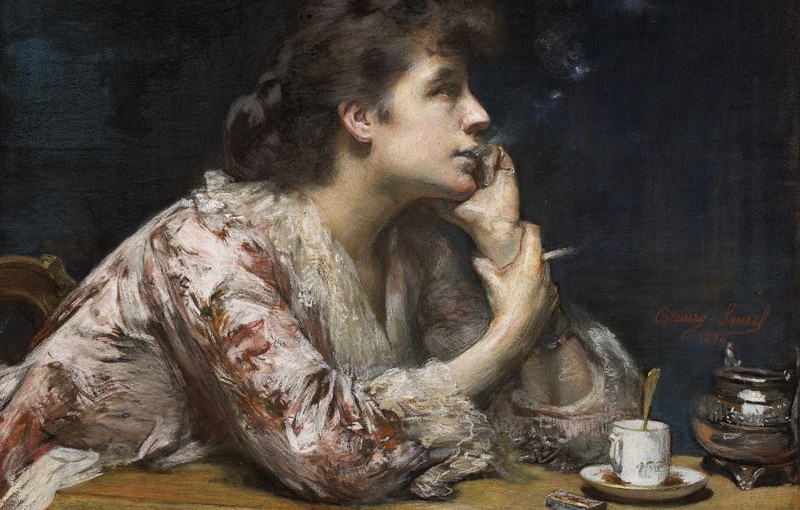 In 1833 the London Medical and Surgical Journal caused a bit of a stink with an article which was given the headline ‘Bad Effects of Smoking Tobacco’.  Its controversial thesis was that smoking was, well, not very good for you:

The practice of smoking is now so general, that our atmosphere is strongly poisoned with of tobacco-smoke. The air is sufficiently impure in this metropolis, without further contamination. At every corner we see a number of pipes or cigars, especially in the mouths boys and young men. The bad effects of tobacco are first produced on the glands of the mouth, which form the saliva; these are excited and form an increased quantity of this fluid, which, instead of passing into the stomach, to assist in digesting the food, is expelled from the mouth. Great smokers have weakened powers of digestion, and are subject to bilious and nervous complaints, lowness of spirits, and diseases of the lungs and brain. The German medical writers allege, that of twenty deaths of men, between the ages of eighteen and thirty-five years, ten are destroyed by tobacco. This substance is one of the most powerful narcotics and debilitants; will produce stupor, drowsiness, head-ache, vomiting, and defective vision when used in excess; and, therefore, when long continued, and frequently employed, must be injurious to health.

This was hardly a novel suggestion. More than two centuries earlier James I had written his famous Counterblaste to Tobacco, in which he condemned the practice as

lothsome to the eye, hatefull to the Nose, harmefull to the braine, dangerous to the Lungs, and in the blacke stinking fume thereof, neerest resembling the horrible Stigian smoke of the pit that is bottomelesse.

Which rather hits the nail on the head. Nevertheless, another London medical journal, the Medico-chirurgical Review, was having none of it. It responded with a withering editorial:

If this be true, a pipe is indeed a Pandora’s box, and woe to the hapless youth, be he of high or of low degree, who dares to open it. We must confess that we do not participate in the alarm of our esteemed contemporary at the contamination of our atmosphere. It will require many more pipes than are at present in circulation, to sully the smoky air of the Modern Babylon. We should like to know what are the diseases of the lungs and brain to which great smokers are subject,

and how the German writers discovered, that ten out of twenty deaths of men, between the ages of 18 and 35, are produced by smoking. This latter is, we fancy, a piece of German fanfaronnade, and carries absurdity upon the face of it.

Fanfaronnade, n.: arrogant or boastful talk. Ironically, the sort of word that only those with a stupendous ego would use.

If smoking were so prejudicial as its opponents assert, the world would ere this have been generally aware of it. The increased civilization and knowledge of the century have nearly banished excesses in wine and spirits from among the educated classes. Their reason and information convinced them that such practices were alike degrading and destructive. But tobacco-smoking is certainly on the increase, and we repeat, that the common-sense of mankind would speedily determine its injuriousness, if it were really injurious in a very perceptible degree.

It’s the leading cause of preventable death in the world.  Smokers are twenty-five times more likely to die from lung cancer than non-smokers.  Other than that, spot-on.

We say nothing of the custom, as a custom; it may be beastly, intolerable, or what not, but we feel well assured that it is not so pernicious as those who dislike it would seem to imagine.

One thought on “Nothing to worry about”