I recently wrote about the horrifying animal remedies which one could buy in a London apothecary’s shop in the seventeenth century.  These were far from being the most disgusting products on sale in these emporia.  Apothecaries also traded in various human substances.  There’s a useful catalogue in Robert James’s 1747 edition of the London Pharmacopoeia:

Homo, Man, is not only the Subject of Medicine, but contributes with his Body to the Materia Medica. Officinal Simples, furnish’d from the Parts of the human Body, whilst alive, are the Hairs, Nails, Saliva, Ear Wax, Sweat, Milk, Menses, Secundines, Urine, Dung, Semen, Blood, the Stones of the Bladder… and the Membrane which covers the Head of the Foetus.

The Hair is commended for the Production of Hairs, for the Jaundice, Luxations, and for stopping an Haemorrhage. The Nails are said to provoke Vomiting, and to be an Hydragogue in Dropsies. The Saliva of a Man fasting is recommended against venomous Bites, as those of Serpents, a mad Dog, and the like. The Ear Wax is said to be a present Remedy in the Colic; outwardly used, it cures the Stings of Scorpions, conglutinates Wounds, and Fissures, and Cuts in the Skin. The Sweat is said to be effectual against the Scrofoula, if it be mixed with the Herband Root of Mullein, and wrapt up in the Leaf, and so applied to the Place. The Menstrual Blood, of the first Flux, dried, is commended, taken inwardly, for the Stone, and the Epilepsy: Externally used, it eases the Pains of the Gout; it is also said to be of Service in the Pestilence, Abscesses, and Carbuncles; it cures the Erysipelas, and cleanses the Face from Pustules.

Nor was it just body parts on offer: bodily fluids were available too.

The Semen or Sperm, is whimsically used by some, for dissolving the malific Influence of Spells, causing Impotence; and of the same is prepared a magnetic Mummy, which serves for a Philtre. The Blood, drank recent and hot, is said to be effectual against the Epilepsy, if the Patient afterwards uses the vehement Motion of running till he sweats; it stops all Sorts of Haemorrhages: Used outwardly, it also represses all Eruptions of Blood, and especially from the Nose.

But perhaps most macabre is evidence of a lively trade in human corpses:

Officinal Simples, taken from the human Carcase, are the Mummy, which is a resinous, harden’d, black shining Surface, of a somewhat acrid and bitterish Taste, and of a fragrant Smell. Under the Name of Mummy are comprehended, first, the Mummy of the Arabians, which is a Liquament, or concreted Liquor, obtain’d in Sepulchres, by Exudation from Carcases embalm’d with Aloes, Myrrh, and Balsam. If this Mummy could be procured right and genuine, it would be preferable to the other Sorts. The second Kind of Mummy is the Egyptian, which is a Liquament of Carcases.  A third Substance, which goes by the Name of Mummy, is a Carcase torrified under the Sand, by the Heat of the Sun: but such a one is seldom to be met with in our Country.

How can a mummy be used to make a medicine?  John Quincy, an English apothecary of the eighteenth century, helpfully provides a recipe for a ‘Powder against Bruises’ in the 1722 edition of his English Dispensatory:

Take sealed Earth, or Bole, Dragons Blood, Mummy, Sperma Ceti [a wax found inside the head of whales], Rhubarb. Mix into a Powder.  This is a very good Medicine upon any accidental Injury, that leaves any Contusions, and suspicion especially of inward Hurt, where common Application cannot be us’d.

Another formula using powdered mummy appears in the 1782 edition of the same work – which was heavily revised by another hand, Quincy having died in 1722:

Linimentum Sympatheticum, The Sympathetic Liniment.  Take oil of roses and fine bole, of each an ounce; linseed oil two ounces; man’s grease, moss of human skull of a person killed by violence, in powder of each two ounces; mummy and man’s blood, of each half an ounce. Make a liniment.

But the editor adds a sceptical postscript to this formula; times have changed, and medicine has moved on.

We give this here only to oblige such as are weak and whimsical enough to have any belief in such things. If the weapon by which a wound is made be dressed with it, it is said to cure as much as any application immediately to the part itself; but for such knowledge the reader may turn to Sir Kenelm Digby’s treatise of the sympathetic power, and meet with a philosophy as ridiculous as the facts are false upon which it is founded; but so easy is delusion to some minds, that they are better entertained with chimæras than demonstrative truth. 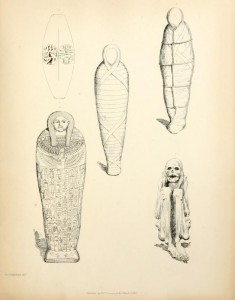 make another revision of the original London Pharmacopoeia, a work which was intended to take into account the huge progress that had been made in medicine in the intervening two centuries. Nevertheless, there are a few odd inclusions in the 1821 edition:

Human Skull.  The powder, in doses of 3J, used in epilepsy: those which have been long buried are to be preferred; and some even limit the effect to that triangular bone called the os triquetrum!

Paring Of The Nails.  Was a common vomit.

Mummy. Either that brought from Egypt, or prepared at home, by dipping muscular flesh in spirit of wine, and hanging it up in a brisk draft of air, or smoking it like ham. Used in bruises, epilepsy, asthma, phthisis.

Sounds like a hipster artisanal cured meat, rather than a preparation for medicinal cannibalism.  Animal lovers may prefer to skip the next entry, which appears on the following page:

Puppies. Live puppies, split in half and applied while warm, have been employed as poultices to draw out venom from sores or boils; they have also been boiled in oil to render it mucilaginous.

I think it’s fair to say that Gray was not entirely sold on the whole mummies-as-medicine idea.  Nor was Charles Alston, whose Lectures on the Materia Medica was published in 1770.  He is quite emphatic on that point:

Mumies are, in my opinion, detestable stuff, and unworthy of a place in any dispensatory… Suppose the Mumy a part of one of the Egyptian kings, embalmed 3000 years ago, his flesh is nothing better than a beggar’s; and as the substances then used in embalming could not cure the disease of which he died (which might be pestilential for ought we know) and no medicine can be supposed so long to retain its virtues; so the antiseptic virtues of these balsams must, at least, have been much weakened, if not intirely overcome, by the natural putrescency of a dead body.

Alston also makes the excellent point – apparently overlooked by everybody else – that there was no way of knowing whether the ‘powdered Mummy’ an apothecary obtained from his dealer was the real thing.  Nevertheless, many swore by it: according to the sixteenth-century naturalist Pierre Balon, the French king Francis I never set out on a journey without a dose of mummy and rhubarb.

Footnote: Since I wrote this post, a Twitter contact has directed me to this excellent article, which gives much more detail on mummy and its many uses.  Thanks to @artinsociety for pointing me to it.