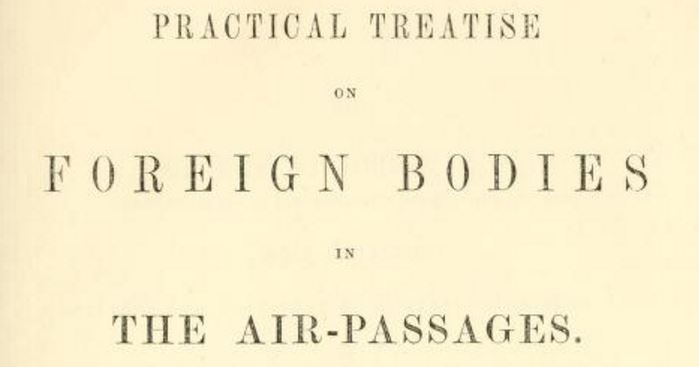 Sometimes doctors don’t have all the answers. Here’s a case in which the medics actually gave up on their patient, who was then cured by her own mother.  This story is taken from Dr S.D. Gross’s Practical Treatise on Foreign Bodies in the Air-Passages, a doorstopper of a book published in 1854. Dr Gross devotes an entire chapter to one possible therapeutic strategy: suspending the patient upside-down until whatever they have inhaled falls out under gravity.

A young lady, espying a middle-sized shot upon the floor, put it into her mouth, and was gently chewing it, when, in a sudden fit of laughter, she allowed it to pass into the trachea.

Lead is quite a soft metal, so a piece of shot may be quite easy to chew. There are, however, about a dozen reasons why you wouldn’t want to do this. For a start, lead is highly toxic. As this young woman soon discovered, shot is also the ideal size to create a blockage in the airway.

Violent coughing immediately succeeded the accident, and harassed her almost incessantly. Four physicians were called in, and, during several weeks, made use of a variety of remedies, such as repeated bleedings, and oleaginous, demulcent, and anodyne medicines, which, although they somewhat appeased the cough, failed to afford permanent relief.

In this condition the patient was abandoned by her professional attendants, under the impression that their services could be of no further benefit.

Forsaken by the doctors, things seemed grim for the young woman. But fear not! Her saviour was already by her bedside.

The mother, an unusually intelligent woman, now determined to watch her with redoubled vigilance, and to contrive some plan by which she might promote the expulsion of the foreign substance. Having carefully inspected the larynx and trachea of a hog, it occurred to her that the shot might find its way out by the glottis by inverting the body.

This is impressively resourceful – particularly the anatomical study which led to her insight.

This conclusion derived support from the fact that the shot had often been felt high up in the throat, during violent fits of coughing. Having duly reflected upon this subject, she resolved to put her theory to the test of practice, without having imparted the scheme to her daughter.

Waiting for a violent attack of coughing, she threw her forcibly out of the bed upon her hands, and had the satisfaction to hear the shot immediately roll out upon the floor. The young lady gradually recovered, and enjoyed tolerably good health for many years; she married, and had several children, but was subject to frequent attacks of haemoptysis [coughing blood], and ultimately died of phthisis [consumption].

Whether the sojourn of the shot, which had been rendered somewhat rough by the previous chewing, laid the foundation of this untoward occurrence, it would be impossible to determine.

It seems unlikely to me that the woman’s death from tuberculosis (a bacterial infection) would be in any way related to a foreign body inhaled some years earlier. But if I’m wrong please feel free to correct me.

One thought on “Mother knows best”