Sir Astley Cooper was the best known, and best paid, surgeon in early nineteenth-century London. He was a great innovator in the field of vascular surgery, devising new methods of treatment for aneurysms and other conditions of the blood vessels. His expertise was both deep and broad: he was an authority on hernias, limb fractures and amputations, and many other fields besides.

Cooper was also interested in the removal of tumours – including this astonishing case published in the Medical and Chirurgical Transactions in 1820: 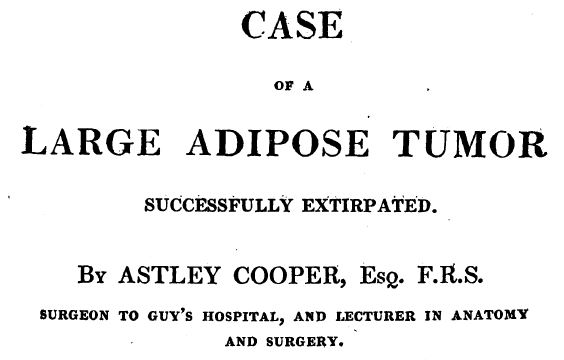 An ‘adipose’ tumour is one consisting largely of fatty tissue. In his prefatory remarks, Sir Astley Cooper observes that such tumours are often quite easy to remove, since they are well-defined and rarely supplied by many blood vessels. But this example was enormous; moreover, its position near the patient’s navel made it possible that it had engulfed some part of the gut. This additional complication meant that it ‘presented more than common danger and difficulty in the operation, independently of its enormous size.’

Nicholas Pearson, aged 57, on the 26th of September, 1820, was admitted into Guy’s Hospital for the purpose of having a large tumour removed, which grew from the front of the abdomen; and of which he gave the following account. At the age of 17 he perceived a swelling, about the size of a pea, situated midway between the umbilicus and ensiform cartilage.

‘Ensiform’ means ‘shaped like a sword’. The ensiform cartilage, now generally known as the xiphoid process, is a small blade of cartilage projecting from the bottom of the sternum (breastbone). It is made from cartilage at birth, but slowly turns to bone in adulthood.

It was unattended with pain, and did not in any way interfere with his duties as a sailor, which was, at that time his occupation; but it gradually enlarged, and in sixteen years had acquired the magnitude of the head of a child, still producing no uneasiness, except from the inconvenience of its size and weight, which was yet insufficient to oblige him to give up his employment.

I doff my cap to Mr Pearson. Sailing the high seas with a tumour the size of a baby’s head protruding from your abdomen really doesn’t sound a barrel of laughs.

The tumour, however, continued gradually to increase; and in the space of twenty-nine years from its commencement, had acquired such a bulk as to render him no longer fitted for the sea, or any useful occupation, he being obliged to support the tumour by a bandage passed round the neck; but, even at this advanced period, it was productive of no pain.

Only now did it begin to affect his general health: he began to suffer from fever, the tumour became inflamed and ulcers appeared on its surface. This was probably an infection – something which can easily arise when bacteria become trapped in folds of skin.

…but evidently not to the degree of the healthy natural parts of the body; for upon one occasion, while sitting before the fire, an extensive portion of the surface of the tumour was burnt, before he was aware of the circumstance.

Horrifying. He was so badly burnt that it took him ‘some length of time’ to recover from the incident.

In this state, without any other change than the gradual increase of the tumour, he sustained his disease for forty years, when the tumour had acquired the following prodigious size; measuring one yard and a quarter around its greatest circumference, and eighteen inches around its neck, extending, when he was sitting down, to his knees; it had increased most rapidly during the last three years, but, up to the time of his admission, he expressed no other inconvenience than that of the weight he had to support, which of itself rendered him so perfectly incapable of obtaining his bread, that he was driven to the necessity of its removal.

This was an exceptionally large tumour. And happily there’s a visual record:

By the autumn of 1820 poor Mr Pearson could take it no longer.  And so on October 13th he was admitted to Guy’s Hospital, where the great Sir Astley Cooper undertook the hazardous removal of this gigantic object:

The first step of the operation was to draw the tumour to the patient’s right side, and then to make an incision through the integuments and cellular membrane at its base; separating the swelling so far from its connections as to be enabled to ascertain that it was not connected with hernia, or in any way with the abdomen; but in this investigation it was found, that a considerable portion, much more sensitive than the rest of the tumour, did project from the swelling into the umbilicus, but that it was not a hernia.

Cooper was worried that the tumour had penetrated through the abdominal wall, but was relieved to find that this was not the case. This greatly simplified the operation, since it meant that the internal organs were not involved.

Having ascertained this important point, the remaining part of the operation consisted in a simple dissection, with the application of ligatures to the veins which were of considerable size, and bled freely, and to the arteries, which, considering the bulk of the tumour, were not so much enlarged as might have been reasonably expected. The patient lost but an inconsiderable quantity of blood during the operation.

Sir Astley makes this sound a great deal simpler than it probably was. As you can see from the illustration above, the blood vessels supplying the tumour were clearly visible through the skin – and big enough to cause considerable bleeding. The fact that he kept this to a minimum speaks volumes about his surgical technique.

The weight of the tumour was taken immediately after its removal, which, independently of the blood which it contained, was 37 lbs 10 oz.

Around 17 kg, the weight of an average five-year-old. This was a simply enormous object.

No bad symptoms followed the operation, excepting a slight pain in his head on the second day.

The wound healed nicely, and eight days later the patient was able to get out of bed and walk around his ward. Sir Astley was famously the most expensive surgeon in town (if you were a private patient, of course), but on this evidence he was worth every penny. The patient had lived with this tumour for over forty years and made a perfect recovery, in the days before anaesthetics or asepsis.

In order to ascertain the relative weight of the tumour of the patient, my apprentice, Mr D. Babington, weighed him after his complete recovery, and found that the tumour was rather more than one-fourth the weight of the man.

A very efficient (if unpleasant) way of losing a great deal of weight.

The tumour is preserved in the Museum at St Thomas’s Hospital.

What an object! It would be interesting to find out whether this mammoth tumour still exists. Many of Sir Astley Cooper’s pathological specimens are now housed in the Gordon Museum of Pathology at King’s College London (a working museum, and not normally open to the puplic) – but I don’t know whether this is one of them.

But what was it?  The most likely candidate would appear to be a giant lipoma – a fatty benign tumour which can sometimes grow to an unusual size. But if you think you know better, please feel free to leave a message in the comments.

One thought on “More than common danger”