Maxillofacial surgeons are some of the most ridiculously overqualified people on the planet. In the UK it is compulsory for them to hold degrees in both medicine and dentistry, and they can only practise after well over a decade of training. This enviable expertise equips them to undertake a wide range of procedures on the face, jaws and neck. Since facial injury is uniquely disfiguring and can involve both bones and soft tissues, major operations can be uniquely sensitive and challenging.

An unusually early example of radical maxillofacial reconstruction was documented in several medical journals in 1868.  At this date there was no specialism dedicated to this branch of surgery, so most of the major operations were undertaken by dentists. This example was performed by a young dental surgeon from upstate New York, George H. Perrine. Although he became a distinguished member of his profession, his career was not without incident.  A few years after this article was published he became embroiled in a feud with a local competitor, who successfully prosecuted him for criminal libel.  Dr Perrine was imprisoned just as he was about to get married – and his unfortunate fiancée became his wife in a ceremony held in a state penitentiary.  He spent their ‘honeymoon’ behind bars.

This account of his remarkable operation comes from the November 1868 edition of Scientific American:

A gentleman aged forty-eight, of a bilious nervous temperament, had, several years previously to his calling upon Dr. Perrine, submitted to an operation for a disease of the lower jaw bone, which extended to and involved the left lateral portion of the tongue. Upon examination, a large portion of the left side of the tongue was found to be removed. The breath was offensive and the saliva ropy. The surface of the tongue where a portion had been cut away had healed imperfectly, and a generally unhealthy state of the gums and soft parts of the mouth prevailed. As might be expected, the health of the patient had suffered, and he seemed anxious and worn.

Dr Perrine first treated the obvious signs of infection, and proceeded only once these had receded.  He then took a cast of both jaws; this is what he found: 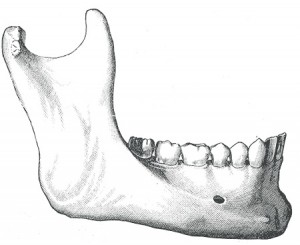 The entire alveolar process [the bone containing the tooth sockets] between the first bicuspid and the wisdom tooth had been removed, together with a part of the body of the bone; and a large portion of the tongue had also been amputated. The action of the muscles upon the remaining portion had drawn it back, so that speech was nearly impossible, and deglutition difficult. Nature had made some feeble attempts at restoration, but so far as could be determined the cavity left by the removal of the process had been only very partially filled by a semi-cartilaginous tissue. It was decided to repair this extended damage by a single denture, made of hard and soft rubber; the vulcanized rubber to sustain the artificial teeth and form a basis for the attachment of the soft rubber, with which it was designed to reconstruct the tongue.

This is a remarkably brave thing to do.  Dr Perrine proposed to remove the bone of the jaw entirely and replace it with a prosthesis of hardened rubber, while a soft rubber sleeve functioned as an artificial tongue: 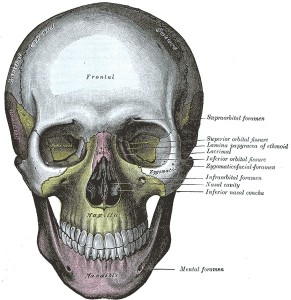 A piece of soft rubber was molded into the shape of the part of the tongue which had been cut away, and from its borders on the right, a thin rubber membrane was extended, forming a sack which could be slipped over and closely fitted to the remaining portion of the tongue, like a glove finger. To the posterior lower border of this portion a ligament of soft rubber was attached, extended and also attached to the arch or plate of hard rubber above described, so that it drew equally in all directions, and covered the soft parts beneath the tongue. Finally, the hard rubber plate was attached by clasps to the dens sapientis and the first bicuspid on the left, and the second molar and first bicuspid on the right.

Not only did Dr Perrine give his patient a new jawbone and tongue, he also replaced the hard palate.  Sadly no long-term follow-up is available, but in the short term at least the operation seems to have been a triumph.

This denture far more than exceeded the most sanguine expectations. The patient was enabled to speak with ease, and masticate almost any kind of food. The distortion of his face previous to its introduction was remedied, and his general health much improved.

2 thoughts on “The man with the rubber jaw”