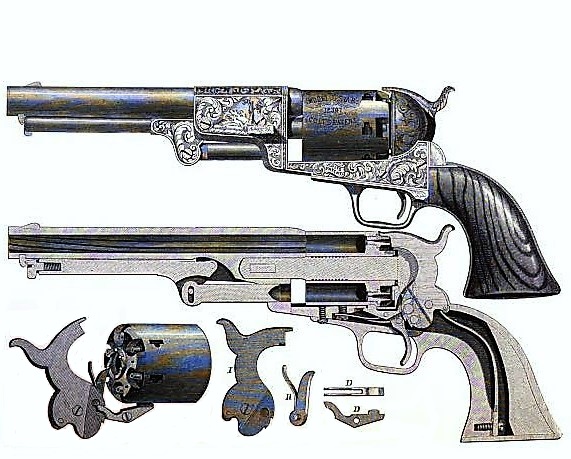 Gunshot wounds have always been a particular challenge for the medic. Some of the oldest surgical manuals contain advice on removing balls or bullets lodged superficially – it was often possible to remove missiles from soft tissue or bone near the skin. But if they had penetrated deeper into body cavities or damaged internal organs they posed an altogether more formidable challenge.

In 1854 The Boston Medical and Surgical Journal published this unusual tale about a man who received a serious injury from a bullet – which exited his body of its own accord via a most unorthodox route. It was reported by Dr C. D Stickney, a surgeon from New Bedford in Massachussetts:

On Wednesday, the 7th of last June, Edwin James, of this city—a painter—was accidentally shot by a lad with one of Colt’s revolvers.

The revolver invented by Samuel Colt (who improved, rather than conceived, the design of a pistol with revolving chambers) went into widespread production in the late 1840s, and was soon widely adopted by the military and private citizens alike.

I was called to him soon after the accident occurred. I found him intensely excited, and with severe pain in his abdomen, where he had received the ball—which entered about three and one half inches downwards and outwards from the umbilicus. Immediately after having received the injury, he voided a small quantity of urine, which was slightly tinged with blood. He soon expressed a desire to urinate again, but found himself unable.

The doctor inserted a catheter into the bladder and was able to drain the trapped urine. The man remained in severe pain, and was still unable to urinate several hours later. The doctor visited him again the following morning:

Thursday morning: Has passed a disturbed night—no quiet sleep. Has vomited several times—is very thirsty. Tongue dry and coated. Skin dry and hot. Pulse 110. Tenderness of abdomen has increased. Has passed urine several times, which was scanty in quantity—high colored and offensive. Saw him several times in course of the day. Has been delirious at times. No material change in symptoms in other respects.

These are worrying signs. The increased tenderness and the ‘offensive’ urine both point to possible infection, which in this period was impossible to treat. Sepsis and death were now a serious possibility.

Friday moming: Has had about two hours refreshing sleep. Pain in abdomen now dull in character, instead of sharp and lancinating.

The treatment consisted mainly in keeping him as still as possible. In course of the night (Friday), feeling that he was quite out of harm’s way, he insisted upon getting up; and in the presence of the one who had the care of him—when in the act of urinating—the bullet passed with the water into the vessel, causing him but little suffering.

His unpleasant symptoms now commenced gradually to subside, and in a short time he was discharged as cured. I saw him, not long since, when he told me that he felt as well as ever, and was able to perform as much labor as before the misfortune happened. The friends of Mr. James, and indeed many of my brother physicians, were slow to believe that the ball could have passed him in this way. Dr. L. Bartlett, of this city, who saw him several times in consultation with me, I am sure will confirm the above-mentioned facts in the case.

A pretty remarkable outcome. It’s not uncommon for bladder stones to be passed with the urine and make their way through the urethra to the outside world, but a bullet? It can’t have been much fun. Still, a happy result for all concerned.

4 thoughts on “The man who peed a bullet”