If there’s one thing that everybody knows about early medicine, it’s the fact that doctors loved to use leeches.  Attaching a leech, or even dozens of them, to remove a small amount of blood from a diseased part of the body was a favourite remedy for the best part of 2000 years – and was still being used well into the nineteenth century. 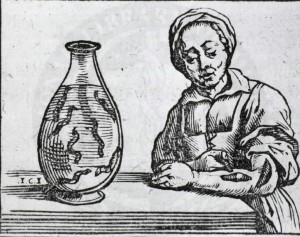 What’s less well known is that doctors sometimes applied leeches to the inside of the body.  An enthusiastic article in favour of this practice appeared in The American Medical Recorder in 1823, by an English doctor, Philip Crampton:

Whatever opinion may be entertained with respect to the proximate cause of inflammation, it seems to be generally admitted that local blood-letting and counter-irritants are among the most effectual means which art supplies for the relief of local inflammation.

Dr Crampton then points out that blood should be taken from the part of the body which is inflamed.  But doctors often violate this principle when treating eye infections: because they are wary of putting a leech anywhere near the eye, they take blood from the outside of the eyelid.  Dr Crampton thinks this is a mistake:

Having in many instances observed how little impression is made upon the inflamed and turgid vessels of the conjunctiva, by the application of leeches, even in very great numbers, to the eyelids or temples… I was led to try the effect of applying a single leech to the inflamed conjunctiva itself, where it covers the lower eyelid. The result exceeded my most sanguine expectation, as a chronic inflammation of the eye, which had subsisted for many weeks, was immediately relieved, and by a second application was, in two or three days, completely removed.

With respect to the manner of applying leeches to the conjunctiva, nothing can be 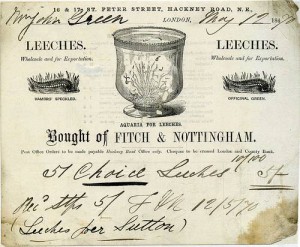 more simple. The patient should be placed with his back to the light, in order that the lower eyelid may be everted without exciting pain; a leech or two, rather below than above the middle size, should be allowed to fix upon that part of the inflamed membrane, which covers the tarsus, taking care that it fastens neither upon the ciliary margin, nor upon the eye itself. The leech fixes and fills himself in this situation much more quickly than upon a cuticular surface, and this observation is equally true with respect to all internal surfaces, for which I have observed that leeches have the strongest appetency.

‘Appetency’ is a great bit of medic-speak.  Why use a normal word like ‘appetite’, eh?

Encouraged by the success attendant upon the application of leeches to the internal surface of the eyelid, I was led to extend the principle to a surface more difficult of access than the conjunctiva, and for the relief of a disease of a much more formidable character than ophthalmia.

All medical men must have observed with how little effect leeches and blisters are applied to the external fauces for the relief of the suppurating sore throat… I was induced, a few years since, in the case of a young person in whom I took a very particular interest, to try what effect would be produced in this disease by applying leeches to the inflamed tonsils, at the commencement of the inflammation. The attempt was attended with fewer difficulties than I could have anticipated, and succeeded beyond my most sanguine expectation.

This raises obvious practical difficulties: how does one attach a leech to the tonsils?  The ingenious Dr Crampton has the answer:

A single thread of silk was passed through the body of the leech, at about its lower third, the ligature being made fast to the finger of the operator, the leech (held securely between the fore-finger and thumb) was introduced into the mouth, and its head, directed by a probe, was brought in contact with the inflamed tonsil. The animal fixed itself to the part in an instant, and, in less than five minutes, being gorged with blood, it fell upon the tongue, and was withdrawn. The relief was immediate. The tonsil continued to bleed for three or four hours. On the following day the inflammation had greatly abated, and in a few days the tumor had completely subsided without suppuration.

Dr Crampton claims that in a major outbreak of scarlet fever in 1820 he had regularly used this method, with unvarying success.  But his ambitions do not end there:

In affections of the head connected with an undue determination of blood to the brain, or with the suppression of an habitual epistaxis, the greatest relief is frequently obtained by the application of leeches to the internal surface of the nostrils. This practice, which is so generally adopted on the continent, has not, I apprehend, in this country met with all the attention which it deserves.

I wonder why not.

2 thoughts on “Leeches: for external and internal use”