In 1842 a Scottish doctor, Edward Binns, published a fat volume under the snappy title The Anatomy of Sleep; or, the Art of Procuring Sound and Refreshing Slumber at Will.  It’s a big book, with big ambitions: Dr Binns claims to be able to teach his readers a universally successful method which will reliably put even the confirmed insomniac to sleep.

An anonymous reviewer in the Edinburgh Medical and Surgical Journal was not impressed.  Dr Binns’ ‘infallible’ method, he points out

does not take up more than one page and two lines. The remaining 503 pages, or, more properly speaking, the whole volume, with the exception of this page and few lines, is taken up with an olla podrida [hodgepodge] collection of facts and observations on life and its phenomena, death, sleep, drowsiness, trance, premature interments, hybernation, capability of animal body enduring extremes of heat and cold, dreams, somnambulism, catalepsy, hallucination, monomania, fainting, asphyxia, syncope, suffocation, drowning, hanging, mesmerism, systems of organization, mental phenomena, sleeplessness, arterialization, narcotism, &c., in fact every thing which could be made to seem in any, even the most distant way, connected with the phenomena of sleep. 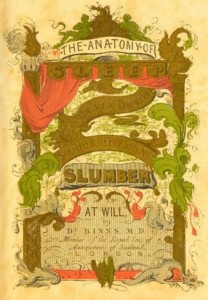 It’s a potboiler, in other words. The review goes on to point out that, despite several entertaining anecdotes, the book is little more than a collection of barely relevant literary extracts. Dr Binns is also criticised for presenting out-of-date research and being ignorant of the latest scholarship about the workings of the nervous system.

So what is Dr Binns’ miraculous cure for insomnia? Those who have bothered to read as far as page 383 of his weighty tome finally reach what seems to be the heart of the matter:

Having, we think, nearly exhausted the preliminary subjects connected with the Art of Procuring Sound and Refreshing Slumber at Will, we shall now proceed to the elucidation of that principle.

Well, that took long enough. Unfortunately this is a false promise, for there follow another eight pages of throat-clearing and irrelevant anecdotes.  Finally, on page 390, he gets to the point:

In the first place, we will suppose a person moderately sleepless. He has retired to bed and cannot rest. He tosses and tumbles about. Turns first on one side and then on the other. Shifts his pillow; pulls the bed-clothes over his shoulders; draws his knees up to his abdomen; places his right arm under his head; in short, exhausts the resources usually put in requisition on these occasions, and yet has failed to procure nature’s sweet restorer — balmy sleep. What is then to be done?

What indeed? He then suggests the revolutionary strategies of counting, or going for a walk.

We then suppose all these attempts have failed, and the patient, for he is indeed a ‘sufferer’ who cannot sleep, still awake.

Aha! Here we go – this is what we’ve been waiting for.

Let him turn on his right side, place his head comfortably on the pillow, so that it exactly occupies the angle a line drawn from the head to the shoulder would form and then slightly closing his lips, take rather a full inspiration, breathing as much as he possibly can through the nostrils. This however is not absolutely necessary, as some persons breathe always through their mouths during sleep, and rest as sound as those who do not. Having taken a full inspiration, the lungs are then to be left to their own action — that is, the respiration is neither to be accelerated nor retarded. The attention must now be fixed upon the action in which the patient is engaged.

He must depict to himself that he sees the breath passing from his nostrils in a continuous stream, and the very instant that he brings his mind to conceive this apart from all other ideas, consciousness and memory depart; imagination slumbers; fancy becomes dormant; thought subdued; the sentient faculties lose their susceptibility; the vital or ganglionic system assumes the sovereignty; and as we before remarked, he no longer wakes, but sleeps.

And, er, that’s it. The Journal’s reviewer is not impressed:

This is the grand recipe; to communicate which to the world this volume was written. And what is it, after all, more than all were previously aware of? It is simply another way of producing monotony; it is simply the abstraction of the mind from other thoughts to one, which, by its monotony, lulls its restlessness to rest, and allows the negative function, sleep, to steal over the senses.

In his desire to be as rigorously critical as possible, the unnamed reviewer overreaches.  The concluding section is withering about a dubious ‘theory’ espoused by Dr Binns:

In one of the notes is quoted from the ‘Vestiges of Creation,’ a statement intended to convey the idea that the animal and vegetable creation were progressively developed by cultivation or by accidental circumstances, or by a law of nature, by the transmutation of the simpler animals and vegetables into the more compound ones.

This is a useful reminder that the idea of evolution was nothing new when Darwin published On the Origin of Species in 1859: many attempts had already been made to suggest that complex organisms had emerged from simpler ones over long periods of time. In 1842, however, this was a fringe theory at best. And the reviewer was having none of it:

Did time and space offer, we could easily prove to demonstration that the whole theory of the successive development of one animal or plant of a higher class of organization from the transmutation of a species or genus of lower grade, was based on a foundation more unstable than the sand.