Samuel Auguste André David Tissot was an eminent Swiss physician of the eighteenth century, best known as the author of one of the first 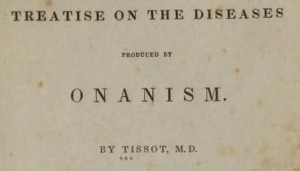 In 1761 he published Avis au Peuple sur sa Santé, a little book aimed at the general public and translated into English as Advices with Respect to Health.  Although much of his guidance remains valid today, other sections are, well, a little outdated.  Take, for instance, his advice on first aid in the event of near-drownings, which begins sensibly enough:

Whenever a person who has been drowned, has remained a quarter of an hour under water, there can be no considerable hopes of his recovery: The space of two or three minutes in such a situation being often sufficient to kill a man.  Nevertheless, as several circumstances may happen to have continued life, beyond the ordinary term, we should not give them up too soon: Since it has often been known, that after the expiration of two, and sometimes even of three hours, such bodies have recovered.

Tissot then lists several measures that should be taken in order to improve the chances of recovery.

Before the advent of CPR – a surprisingly late discovery which was only made in the 1950s – rubbing the body was thought to be the best way of restoring the circulation, even if the heart had stopped.  Artificial respiration, however, was already known in the 18th century:

Unconscious patients aren’t often given a fag in the ambulance these days; I wonder why not.  This being the 18th century, bleeding is central to the treatment, of course:

And why stop at blowing tobacco smoke into the patient’s lungs?  Two orifices are better than one.

Tissot even recommends using a pipe attached to a bladder for this purpose, much like the manual respirators used today by paramedics.

It’s a wonder the patient had any space left in his airways for oxygen, with all these substances being inserted into them.

Carduus benedictus, also known as Holy Thistle, was believed to be a panacea by early medics: in Much Ado About Nothing Margaret says to Beatrice: “Get you some of this distilled Carduus Benedictus and lay it to your heart; it is the only thing for a qualm.”

Lastly, though they should be manifestly reanimated, there sometimes remains an oppression, a coughing and feverishness: And then it becomes necessary sometimes to bleed them in the arms; and to give them barley-water plentifully.

The barley-water doesn’t sound too bad an idea, at least.  Some of his suggestions are fairly dreadful, but Tissot concludes by condemning certain other treatments which are even worse:

He concludes with another helpful tip:

The heat of a dung-heap may also be beneficial: and I have been informed by a sensible spectator of it, that it effectually contributed to restore life to a man, who had remained six hours under water.

2 thoughts on “In event of drowning, blow smoke up bottom”