We’ve already established that skipping ropes should be avoided at all costs, but it’s not all bad news for those who enjoy childish pursuits.

James Wardrop’s On the Nature and Treatment of the Diseases of the Heart (1831), written in an age when most forms of cardiac disease were essentially untreatable, contains some advice which reflects the frustration felt by many physicians at this date:

A youth with an irritable heart was often attacked with fits, and when he was warned of their approach he used to be able greatly to mitigate the paroxysm by repeating a few sentences in a subdued tone of voice.

One wonders how a patient – having just been diagnosed with a serious heart problem – would react on being offered this as a treatment of first resort.  But fear not!  Dr Wardrop has alternatives: 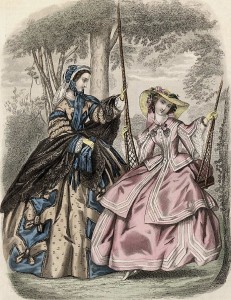 check the convulsive fits.  Whenever she felt intimation of an approaching attack, she instantly repaired to the garden, where there was a swing fixed up; and swinging invariably relieved her.  She had been carried to it, even in the midst of a paroxysm, when it might have been thought impracticable, from the violent agitations; yet the moment the swing was put in action the paroxysm ceased.

Some time later the woman’s doctor found himself treating a 19-year-old who presented similar symptoms; remembering the swing remedy, he decided to try it again:

She was taken out of doors to the swing in a child’s chair, on account of her being partly deprived of the use of her lower extremities; and it was found that the action of the child’s chair had an effect almost similar to that which the swing had in the other patient.

What a shame this didn’t catch on: there should be a row of swings outside every cardiology clinic.