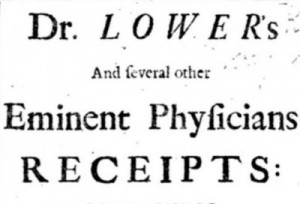 A curious book of remedies was published in London in 1700, entitled Dr. Lower’s, and several other Eminent Physicians, Receipts, Containing the Best and Safest Method for Curing Most Disease in Human Bodies.  It was aimed at those without easy access to medical services – a compilation of home remedies which could be prepared by those without any pharmacological expertise.  The author explained his purpose in a preface:

Now, considering that many People liv’d so remote from a Judicious Physician, that the sick Person in many acute Diseases might lose his Life before a Physician could be brought to his Assistance: That others were not able to give Fees, and consequently must dye for want of Money to pay a Doctor…These Considerations, I say, put me upon publishing this Manual of Prescriptions, that all Persons might have Cheap and Effectual Remedies at hand to cure their Diseases…

He could not resist a swipe at the apothecary profession – with which many doctors had an antagonistic relationship:

…without hazarding their Lives upon the Carelesness, or sordid Interests of Apothecaries, who play what Tricks they please, and can never be detected when the Medicine is compounded [i.e. diluted, or mixed with inert ingredients]

The book’s title refers to Richard Lower, one of the most eminent physicians of the seventeenth century, a figure of historic importance whose work on the circulation of the blood had a lasting impact.  His experiments on blood transfusion were particularly notable. The inclusion of his name gave the publication a certain authority which would certainly have increased sales; and it was successful, going through at least four editions.  Here is his medicine for a fever:

Take of the whitest Hen-dung you can get, and boil it in Aniseed-water, till it be somewhat stiff, then spread it on a Plaister, and take an Onion cut into Slices, which being prick’d with a Knife, lay upon the Plaister, and apply to both Wrists an Hour before the Fit comes, as hot as the Patient can endure; let the Plaisters lie on a Week after they are apply’d.

This certainly sounds more domestic than pharmacological.  Several of the remedies have this kitchen-table feel to them.

A famous Water to preserve the Eye-sight; or if lost, to restore it.

Take a Rye Loaf, without Salt or  Leaven, cut it into thin Slices, and distil in a cold Still; take of the Water that comes from it, and drop of it into the eyes, twice or thrice every Day, for a Month together; this Water cured a Gentleman after he had been blind a whole Year.  Take also a Rag of Holland Cloth, and burn it between two Pewter Dishes and of the Water that comes from it drop a little into the Eye every Night.

Others are downright bizarre:

To stop Bleeding at the Nose:  Lay to the Temples the Ear of a Hare burnt to Ashes, and temper’d with Vinegar.

Several suggest courses of action which any modern doctor would wince at.  Even three centuries on, it seems surprising that any medic ever thought this was a good way of removing a spider’s web from one’s eye:

Take 2 or 3 Lice, and put them alive into the Eye that is griev’d, then shut it close, the Lice will certainly suck the Web out, and afterwards, without any Damage to the Patient, come out.

Really?  Finally, a remedy ‘For Sinews that are shrunk’ is less obviously harmful to the patient, but is also indefensible from an ecological point of view.  Twelve seems a bit excessive:

Take 12 young Swallows out of the Nest; of Rosemary, Lavender, and Strawberry-leaves of each an Handful; bruise the Swallows with their Guts and feathers, then boil them all in a sufficient Quantity of fresh Butter; after you have strain’d it, rub the Part with it very well by the Fire. 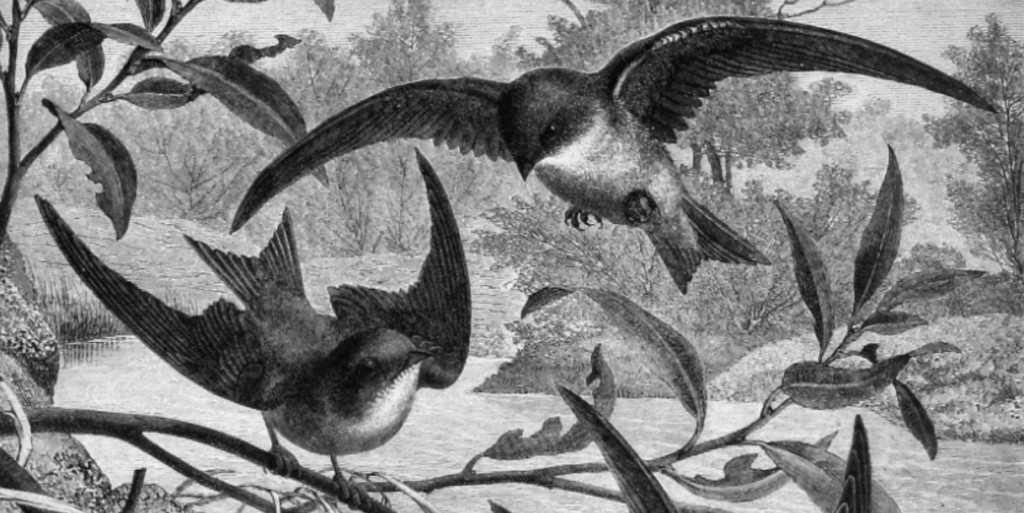 One thought on “Heal thyself”