In 1823 The Lancet’s regular summary of goings-on at the London hospitals contained this interesting report of an early public demonstration of the stomach pump.  The experiment documented here took place at Guy’s Hospital:

Friday, Nov. 21. At half past one o’clock the operating theatre was crowded to excess, in consequence of its having been stated on the preceding Tuesday that some experiments were to be tried on a dog this day, for the purpose of ascertaining whether liquids could be put into the stomach, and removed from it by means of an instrument, which had been lately invented by Mr. Reed, of Hosmonden Lane, Kent.

Mr Reed was not in fact a medic but a gardener.  An explanation for his presence in an operating theatre will be found below.

Prior, however, to the making of the experiment, a middle-sized steatomatous tumour was removed from a female, just below the inferior angle of the left scapula.

Note that the experiment and the operation both took place in the same operating theatre, neither of them under sterile conditions.  It’s enough to give a microbiologist palpitations. 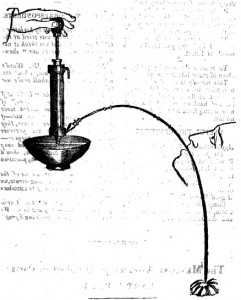 At two o’clock precisely, a dog was placed on the table. Its legs and body being secured by two or three of the pupils, an iron pestle was put into its mouth, to keep the jaws separated; and then a drachm of opium, dissolved in four ounces of water, was poured into the stomach. After this, the pestle was removed, and the dog left free on the table. In the space of twenty minutes the dog manifested a disposition to vomit, which was immediately checked by pressing the finger against the oesophagus. The opium, however, had no very sensible effect on the dog till the expiration of thirty minutes, when the dog was unable to stand upright.

Dogs have had a rough time on this blog recently; but – spoiler alert – don’t worry, this one will be all right in the end.

At the expiration of thirty-three minutes from the time the opium was given, the stomach was evacuated of its contents, and washed out by means of the instrument, a description of which we shall now give.

The instrument consists of a brass syringe, capable of holding three ounces, with a tube proceeding from an inch above the mouth, at nearly right angles to it; by this contrivance the syringe has two distinct outlets for the attachment of two tubes. The manner of using it is as follows: when any liquid is to be thrown into the stomach, the mouth of the syringe is put into the vessel containing it, and a long tube, composed of elastic gum or leather; with a joint in the middle, previously put into the stomach, is attached to the lateral opening; and, when the piston is raised, the fluid is received into the cylinder from the vessel, which is prevented passing back by means of a spherical valve in the mouth; when the piston is pressed down the fluid passes, by means of the tube attached to the lateral opening, into the stomach, and thus any quantity of fluid may be injected into it. On the contrary, when it is wanted to empty the stomach of any liquid, all that it is necessary to do is to change the position of the mouth of the syringe.

And the outcome?  Success:

The instrument succeeded very well in the dog, which appeared to be little worse for the experiment. Mr. Reed was in the theatre during the whole of the time, and superintended the use of the instrument; on quitting he received the unanimous applause of those present.

Sir Astley Cooper, just after the experiment had been tried, looking at what had been removed from the stomach, smiled, and said that the instrument would do well for an alderman after a city feast. — (A laugh.)

Mr Reed was not in fact the inventor of the stomach pump. The first to come up with the idea was Edward Jukes, a surgeon who first published his idea – and tested the idea by removing his own stomach contents with a syringe – in 1822.  He had been inspired by the death of William Stuart, the Archbishop of Armagh, who died on May 6th 1822 after ingesting a poisonous substance, believed to have been an ‘improper medicine’.  In an early paper on the subject Jukes referred darkly to ‘piracy’ of his invention, and in a letter to the Medical Adviser one of his colleagues, James Churchill, leapt to his defence:

SIR: In the fifth number of “The Medical Adviser,” you gave a description of an apparatus, (accompanied by a drawing,) for the removal of poison from the stomach, as invented by Mr. Reed, gardener to a gentleman in Kent; and while I am willing to concede to him all the merit of it, as far as his improvement on the common syringe goes, still I beg to  inform you that the public are indebted to Mr. Edward Jukes, surgeon, at Pimlico, not only for being the first to invent the tube, but also to put its applicability to the test of experiment, by drinking several drams of laudanum.

Mr Churchill does not pull any punches:

I am surprised that Mr. Reed, should have the effrontery to stand forth as the sole inventor of the apparatus, when he very well knows that his specification to obtain the patent only applies to his syringe, as applicable to the watering of garden plants, to the extinguishing of fire in houses, and to the administration of injections; all of which purposes it well answers.

Mr. Jukes invented the tube two years ago, (as before stated,) and merely applied instead of the syringe a large elastic gum bottle, as represented by fig. 2. This is filled with water, and pressure being made on it, its contents are easily injected into the stomach; this being effected, it is allowed to recover its former position, by its own natural elasticity, when, upon a simple principle in hydraulics, it immediately becomes re-filled.

Mr. Ward, of Nottingham, who so promptly saved the life of a woman, far advanced in pregnancy, purchased Mr. Jukes’s apparatus of Gill, the manufacturer ; and I know of no event more calculated to interest our best feelings, than a discovery of so much importance to mankind. It was a desideratum in medical science, and humanity must triumph at the result; while the most pleasurable emotions will naturally be excited in the bosom of the inventor, who heroically risked his own life, to save that of others.

2 thoughts on “Hard to stomach”