This dramatic headline from an early edition of The Lancet caught my eye:

It’s a great illustration of the changing nature of surgical risk.  If today a patient died after having a nose job, it would probably be on the front page of the newspapers; death is not an expected complication of a nose reconstruction.  But 1827 was a very different time: no anaesthetics, no antiseptics, and – perhaps most significantly – the patient had lost his nose to syphilis: 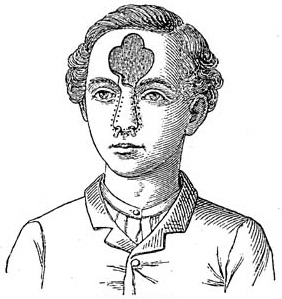 A.F., a man about 49 years of age, had been for a considerable time in the Hopital des Veneriens, whence, after a long use of mercurial frictions, he had been discharged cured, but with total loss of his nose. He applied for admission in the Hospice de la Pitie, in the hope that the deformity of his face might be lessened by a surgical operation. M. Lisfranc hesitated at performing the rhinoplastic operation, being apprehensive that the wound would, under such circumstances, assume a syphilitic character; however, after having observed the case for some time, he at last decided upon it, and it was performed on the 16th of July.

Jacques Lisfranc de Saint-Martin was an eminent surgeon with wide-ranging expertise.  He was a pioneering gynaecologist but also made many contributions to orthopaedics; a type of foot fracture, the Lisfranc injury, is named after him.

Lisfranc began with marking out the portion of skin which was intended to form the new nose; the marks were made with nitrate of silver, as ink is too easily washed off by the blood.

This method of nasal reconstruction using a flap of skin from the forehead is probably the oldest, thought to have been performed by the Indian surgeon Sushruta in the 1st millennium BC.

The flap was now formed, and the edges of the nasal opening were pared off; after which, it being thought advisable not to dress the wound before the bleeding of the numerous small vessels ceased, the patient was removed to bed. Although this part of the operation lasted a considerable time, he bore it with extraordinary fortitude. After two or three hours, the wound was dressed. For this purpose the nasal opening was filled with a dossil of lint, which had, as much as possible, the form of a nose, and over which the triangular flap was laid; the margins of the latter were applied to those of the nasal aperture, and kept in this situation by twelve or thirteen sutures, and two transverse straps of sticking plaster, with which the wound of the forehead was also dressed.

A long operation with instruments which had not been sterilized, and an extensive post-operative wound: this is a recipe for infection.

During the night after the operation, the patient was restless and somewhat feverish. On the next day he was a little better, and slept a few hours. The flap was hot and swollen; the wounds had a favourable appearance.  For some days afterwards, the patient felt tolerably well, but the fever continued, and his nights were very restless. On the 22d, part of the lint under the flap was removed, and on the 23d the sutures were withdrawn. The parts had united only on the two upper thirds of the left side. The wound of the forehead was in profuse suppuration.

On the 25th, the swelling of the flap had gradually subsided, and, under the use of graduated compresses, the left side of the artificial nose had completely united with the edge of the nasal aperture.  28th of July. The form of the nose was become more and more regular; on the left side the cicatrix was quite firm, but on the right there seemed very little tendency to coalition; the wound of the forehead suppurated, and had a whitish appearance; the fever had much lessened.

On the 29th a sudden change took place, the wound of the forehead became gangrenous; the patient was very restless, and died in the evening.

As if perplexed by this turn of events, the author concludes, irrelevantly, that

On examination, the organs were found in a state of perfect health.