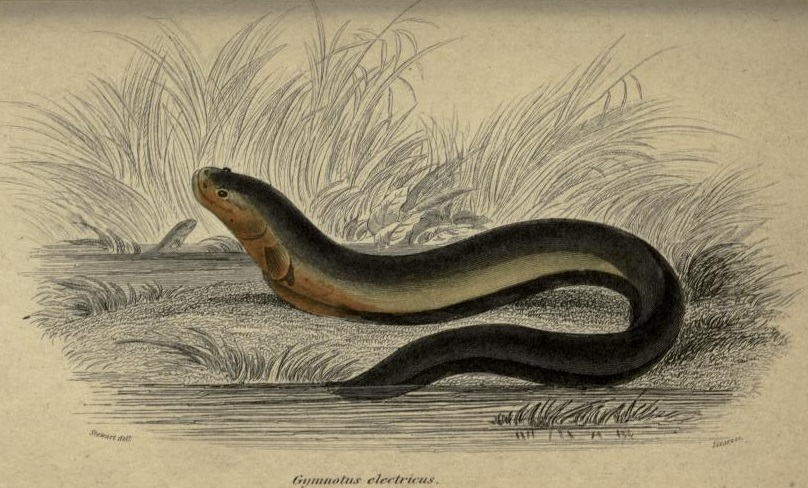 Few creatures have provided such enduring fascination to the medical profession as the electric eel (Electrophorus electricus), a creature capable of delivering an electric shock of up to 850 volts (and 1 amp) on demand.  Though remarkable, they are not unique: several other species of electric fish are known, including the electric catfish found in the Nile (Malopterurus electricus), depictions of which appear in 5000-year-old Egyptian tomb paintings.

In the first century AD the Roman physician Scribonius Largus even suggested using the discharges of a torpedo (a species of electric ray) to treat headaches. The investigation of electrical phenomena by natural philosophers in the 18th century, and Luigi Galvani’s discovery that electricity played a role in animal tissue, prompted renewed interest in these mysterious beasts.

Several of the most prominent scientists of the late 18th and early 19th centuries conducted experiments on electric fish.  The first to prove that the shocks they produced were electrical in nature was John Walsh; inspired by his work, the great surgeon and anatomist John Hunter published a paper on the electric eel in 1775 in which he identified one of the two organs with which it generates electric current – known to this day as Hunter’s organ.  In the same year, the Philadelphia physician Hugh Williamson conducted 19 experiments of increasing complexity, including these:

11. Taking another gentleman in company by the hand, he touched the eel, while I held one of my hands in the water; the shock passed through us both.

12. Instead of putting my hand into the water, at a distance from the eel, as in the last experiment, I touched its tail, so as not to offend it, while my assistant touched its head more roughly; we both received a severe shock.

Williamson also noted that the shock produced by the eel was strong enough to pass all the way down a chain of ten men holding hands. At this date the species was thought – wrongly – to be part of another genus, Gymnotus, also known for its electrical activity (investigated in a series of experiments by the great chemist Michael Faraday).

The following tragicomic tale about an electric eel appeared in The New England Journal of Medicine and Surgery in 1822, when eel mania was still at its height:

A gymnotus electricus, or electric eel, lately arrived alive, and in good health, from Surinam, at the Jardin des Plantes, at Paris. The savans and naturalists were all in motion, and hastened to see with their own eyes and touch with their own hands this living electrical machine. The greater number were satisfied with a single touch and consequent shock; but one doctor, either urged by a greater zeal for science, or governed by a more insatiable curiosity, resolved to try the extent of the animal’s powers, and seized it with both his hands, but had quickly reason to repent his temerity, for he immediately felt a rapidly repeated series of the most violent and successively increasing shocks, which forced him to caper about in the most extraordinary manner, and to utter the most piercing screams from the agony that he felt.

So far, so hilarious; but then things took on a more serious appearance.

He then fell into convulsions, in consequence of which, his muscles became so contracted, or from some strange property in the fish, it became impossible to detach the animal from his grasp.

Electric current promotes muscle contraction, hence the doctor’s inability to let go of a slippery fish. Somebody once told me that for this reason it’s a good idea to touch a metal surface you suspect of being electrified only with the back of your fingers, because they will then contract away from the metal surface rather than sticking to it. It strikes me now that it’s much better advice to avoid touching the metal surface in the first place.

In this situation he remained a considerable time, and would in all probability have expired under the agony of his sensations, if some one of the persons present had not suggested the idea of plunging his hands in water, when the eel immediately dropped off. He (the doctor) has been since most dangerously ill.

Moral: you don’t mess with an electric eel.

One thought on “Don’t mess with an electric eel”