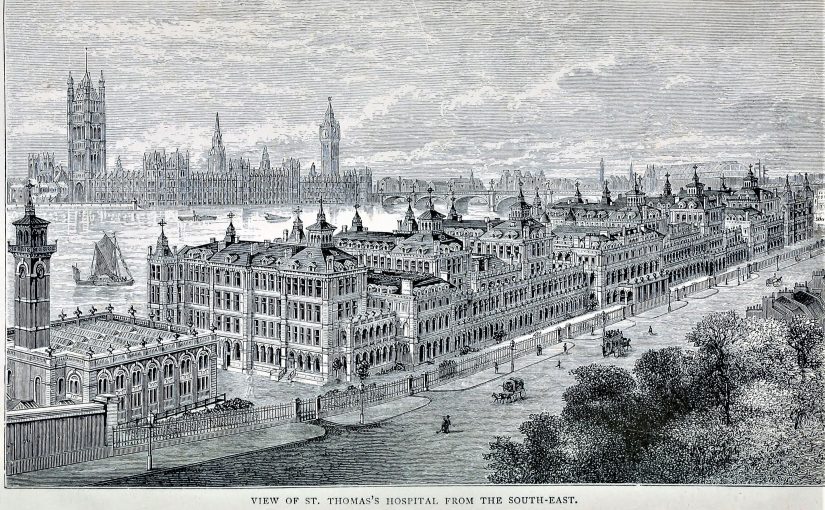 Years ago, many leading hospitals had their own journals, with most or all of the articles produced by the institution’s clinical staff. A couple of American centres (notably the Mayo Clinic) still lend their names to medical journals, but on this side of the Atlantic such in-house publications have largely gone extinct.

This criminal caper was published in the St Thomas’s Hospital Reports – eponymous journal of a major London teaching hospital – in 1890, twenty years after the institution moved from Southwark to its current riverside location opposite the Palace of Westminster. The author, Bernard Pitts, although never famous outside the profession, was a pioneer of abdominal surgery and well known for his expertise in airway interventions.

Charles G — , aged 50, was admitted into St. Thomas’s Hospital under my care on June 2nd, 1886, with symptoms of foreign body in the right bronchus.

The two main bronchi, right and left, are the air passages into the lungs. Having an object stuck in either is, for obvious reasons, a potentially dangerous situation.

His history was a remarkable one; he had for some time earned a living by passing sham jewellery at pawnbrokers’ as made of pure gold. The round earring illustrated by the drawing [below] has gold on the circumference and at the back, where it would be tested, but is merely coated on the surface. Its real value is about 2s. 6d., but he was in the habit of obtaining 10s. from the pawnbrokers after they had applied a test to the back.

The scam would appear to rely on having a regular supply of these fake earrings, each requiring an outlay of two shillings and sixpence – but it was evidently worth the investment, since the scammer kept at it.

On May 7th he was detected and given into custody; the policeman seized him by his collar as he was attempting to swallow the earring in order to hide the evidence. He had a violent fit of choking and was very sick, and lost his voice completely. He was charged in the afternoon, and was obliged to write his defence.

Three days later he was taken to the magistrates’ court to face charges. He did not complain of any illness, but was in evident pain and could not speak.

He was sentenced to six months’ hard labour, and was admitted at Pentonville on May 23rd. He came under the care of my friend Mr. Cowen, the Assistant Surgeon to the prison, who recognised the condition and placed him in the infirmary.

A few days later the patient was taken to see Mr Pitts.

He could then only speak in a whisper, his face was dusky, his breathing noisy and laboured, and he had a constant secretion of saliva and a metallic taste in his mouth. By external examination and digital exploration of the pharynx nothing could be detected.

Mr Pitts realised that he needed technological assistance to locate the foreign body. So he called in a colleague expert in the use of newish surgical instrument: the laryngoscope.

Various attempts were made in the mid-nineteenth century to construct an instrument capable of visualising structures of the airway. As early as 1829 a London physician called Benjamin Guy Babington became the first person to examine the vocal cords of a living patient (the ‘patient’ was in fact a colleague), using a mirror mounted on a specially-designed curved handle. But it was not until the 1860s that the laryngoscope became a regular part of the medical armoury, thanks to the improvements made by the physiologist Johann Nepomuk Czermak.

Dr. Semon saw the patient with me on the following day…

Felix Semon was a leading exponent of the laryngoscope, and performed important research on the innervation of the larynx.

…and by the aid of the laryngoscope was able to see something bright by the left vocal cord. As the ear-ring had a sharp-pointed catch it was not thought wise to attempt extraction by the mouth, but the patient absolutely refused an external operation, saying he would not have his throat cut.

Fair enough! At this date surgeons were used to performing emergency tracheotomies to remove foreign bodies, but it was certainly not a risk-free procedure.

We left tracheotomy instruments in case of sudden spasm. He was, however, such a constant source of anxiety that a free pardon was granted by the Home Secretary on condition that he came into hospital for treatment.

This is quite a surprising turn of events. It is hard to imagine anything like this happening today, unless it was a compassionate pardon for a patient with a terminal illness. It suggests that the patient’s offence was deemed to be fairly minor.

On admission, June 2nd, it was found that the conditions had altered. On the previous Sunday, after a violent fit of coughing, the patient had felt the ear-ring slip down his trachea. His voice was almost restored, but he had severe pain on the right side of his chest (about the junction of the third rib with the cartilage). Air was entering the left lung more freely than the right, no musical rhonchus could be detected…

‘Musical ronchi’ is a term some doctors still use, though it has largely been replaced by the more readily understandable ‘sonorous wheeze’. This abnormal breathing sound indicates narrowing of the airways, caused (for instance) by asthma or a foreign body.

…his breathing was easy, but occasionally he had fits of coughing, following by slight dyspnoea and some expectoration tinged with blood. Dr. Semon again examined him with the laryngoscope; the left cord was fixed by inflammation around it, but no foreign body was now visible.

Suggesting that it had slipped further down the bronchus. Not a good sign.

After watching him for a time it was determined to try inversion, and on June 17th he was accordingly held up by his feet and violently shaken and slapped on the back.

It sounds brutal, and probably was – but the method was frequently employed in such circumstances.

I was ready to perform immediate tracheotomy if any signs of spasm ensued. Nothing at the time occurred, and he was put back to bed in a very exhausted state. About one hour afterwards he had a violent fit of coughing, attended with some bleeding, and suddenly the ear-ring was ejected with such force as to hit the wall close by his bed.

He made a complete recovery, and a few days afterwards left the hospital quite well. I saw him a few weeks later; his voice was then normal. He informed me that he was going to America.

An impressively total recovery from a life-threatening situation. Let’s hope his brush with death also cured him of his criminal tendencies.

2 thoughts on “Difficult to swallow”