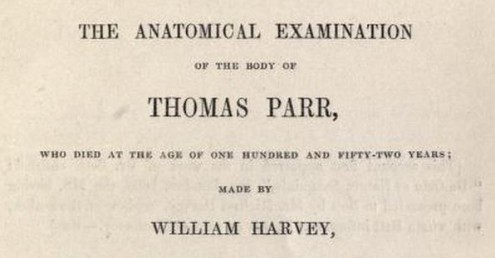 William Harvey is deservedly one of the most famous physicians who ever lived.  His demonstration that the heart is a pump which circulates blood throughout the body was a triumph of early modern science, a discovery that revolutionised medicine.

In addition to De Motu Cordis, the treatise in which he details the sophisticated experiments and subtle reasoning that led him to this important conclusion, Harvey’s Complete Works contains an intriguing and much less well known document.  It’s a short report of a post-mortem he conducted in 1635 on the body of England’s oldest man:

Thomas Parr, a poor countryman, born near Winnington, in the county of Salop, died on the 14th of November, in the year of grace 1635, after having lived one hundred and fifty-two years and nine months, and survived nine princes.  This poor man, having been visited by the illustrious Earl of Arundel when he chanced to have business in these parts, (his lordship being moved to the visit by the fame of a thing so incredible), was brought by him from the country to London; and, having been most kindly treated by the earl both on the journey and during a residence in his own house, was presented as a remarkable sight to his Majesty the King.

The excitement of this royal audience seems to have been too much for the poor centenarian, for within a short time of his presentation at court Mr Parr breathed his last.  The king commanded Harvey (and several other royal physicians) to examine the body.

The body was muscular, the chest hairy, and the hair on the fore-arms still black; the legs, however, were without hair, and smooth.

The organs of generation were healthy, the penis neither retracted nor extenuated, nor the scrotum filled with any serous infiltration, as happens so commonly among the decrepid; the testes, too, were sound and large; so that it seemed not improbable that the common report was true, viz. that he did public penance under a conviction for incontinence, after he had passed his hundredth year; and his wife, whom he had married as a widow in his hundred-and-twentieth year, did not deny that he had intercourse with her after the manner of other husbands with their wives, nor until about twelve years back had he ceased to embrace her frequently.

Alas, I have been unable to find any further details of Mr Parr’s ‘conviction for incontinence’ – either the nature of his offences, or what his ‘public penance’ might have entailed.

The chest was broad and ample; the lungs, nowise fungous, adhered, especially on the right side, by fibrous bands to the ribs. They were much loaded with blood, as we find them in cases of peripneumony, so that until the blood was squeezed out they looked rather blackish. Shortly before his death I had observed that the face was livid, and he suffered from difficult breathing and orthopnoea. This was the reason why the axillae and chest continued to retain their heat long after his death: this and other signs that present themselves in cases of death from suffocation were observed in the body.

From these details it is not obvious what the cause of death might have been: lung cancer is one possibility, heart failure another.

The intestines were perfectly sound, fleshy, and strong, and so was the stomach: the small intestines presented several constrictions, like rings, and were muscular. Whence it came that, by day or night, observing no rules or regular times for eating, he was ready to discuss any kind of eatable that was at hand; his ordinary diet consisting of sub-rancid cheese, and milk in every form, coarse and hard bread, and small drink, generally sour whey.  On this sorry fare, but living in his home, free from care, did this poor man attain to such length of days.  He even ate something about midnight shortly before his death.

‘Sub-rancid cheese’ does not sound a particularly enjoyable or nutritious diet, but is unlikely to have killed him outright.

The viscera were healthy; they only looked somewhat white externally, as they would have done had they been parboiled; internally they were (like the blood,) of the colour of dark gore… All the internal parts, in a word, appeared so healthy, that had nothing happened to interfere with the old man’s habits of life, he might perhaps have escaped paying the debt due to nature for some little time longer.

Harvey and his eminent colleagues concluded that the old man’s death had been the result of his sudden move from the healthy air of Shropshire to the pollution and muck of London,

a city whose grand characteristic is an immense concourse of men and animals, and where ditches abound, and filth and offal lie scattered about, to say nothing of the smoke engendered by the general use of sulphureous coal as fuel, whereby the air is at all times rendered heavy, but much more so in the autumn than at any other season. Such an atmosphere could not have been found otherwise than insalubrious to one coming from the open, sunny and healthy region of Salop; it must have been especially so to one already aged and infirm.

Harvey adds that the rich food on offer at the King’s table would have been a shock to his humble stomach:

And then for one hitherto used to live on food unvaried in kind, and very simple in its nature, to be set at a table loaded with variety of viands, and tempted not only to eat more than wont, but to partake of strong drink, it must needs fall out that the functions of all the natural organs would become deranged.

The report then observes that Parr retained his mental faculties to the end, even at the age of 152; and then comes the devastating conclusion, a beautifully understated piece of professional scepticism:

His memory, however, was greatly impaired, so that he scarcely recollected anything of what had happened to him when he was a young man, nothing of public incidents, or of the kings or nobles who had made a figure, or of the wars or troubles of his earlier life, or of the manners of society, or of the prices of things in a word, of any of the ordinary incidents which men are wont to retain in their memories.