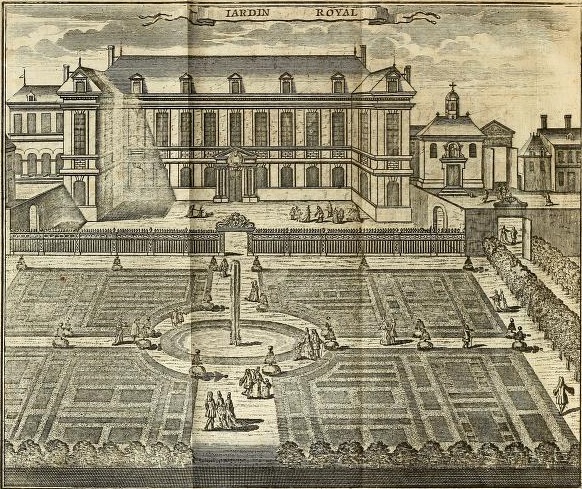 The image above shows the Jardin Royal (Royal Garden) in Paris – misleadingly named, since although it included a botanical garden it was primarily an educational institution. In addition to botany, it offered classes in chemistry, anatomy and surgery.

One member of its faculty was the surgeon Pierre Dionis (c.1643-1718), who taught there for many years. He was also a court physician to Louis XIV, but is best remembered for the surgical textbook he published in 1707, Cours d’Operations de Chirurgie, Démonstrees au Jardin Royal (‘Course on the operations of surgery, demonstrated at the Royal Garden’).  This was the most influential text on the subject for many decades, remaining in print for most of the eighteenth century. 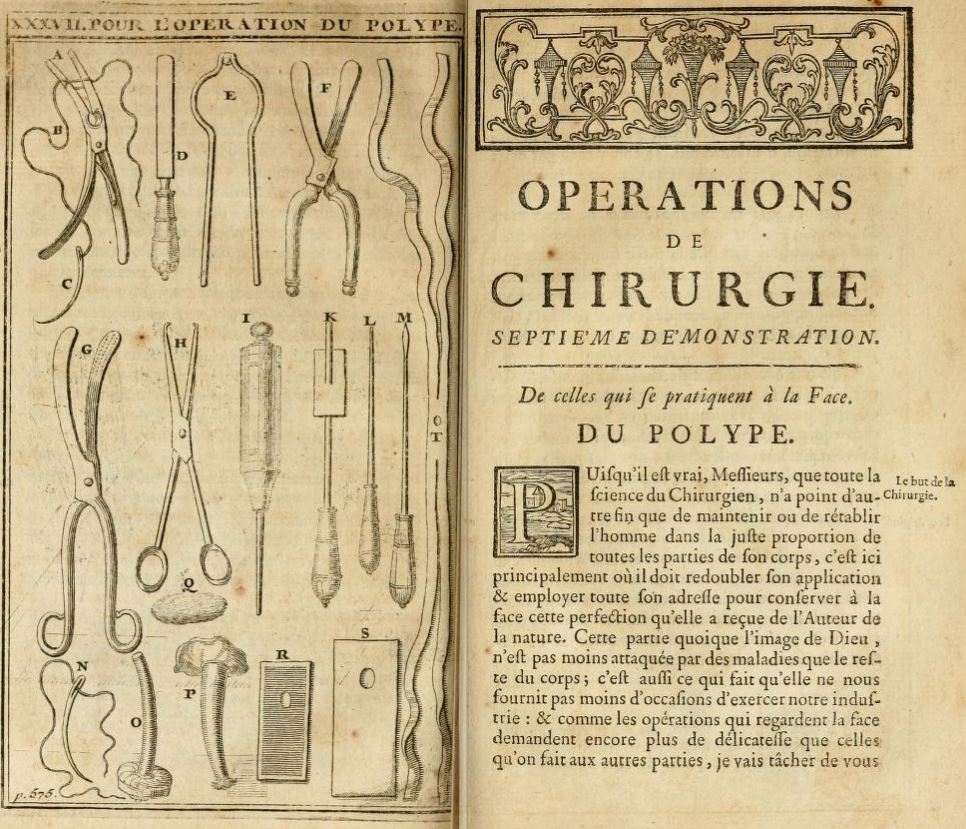 The chapter on facial surgery, which deals mainly the removal of polyps and other unwanted growths, contains a short section about wounds of the nose. Dionis includes a couple of arresting anecdotes by way of illustration:

The wife of a notary of Paris, jealous of the spouse of a butcher of Fauxbourg St. Germain, whom she imagined to be the mistress of her husband, went to her rival’s market stall one morning. After reproaching the woman for her supposed indiscretions, she seized one of the butchers’ knives, and struck her with it upon the nose.  It was almost completely severed, hanging down and remaining connected only by the skin on one side and a portion of the cartilage; the other side was totally cut through.

A nasty injury, though the notary’s wife evidently lacked her rival’s knife skills (as they say on Masterchef).

It was immediately sewn back, and healed, leaving only a trifling deformity. I report this case in order to embolden surgeons to use the same method when the opportunity arises.

The judges invented a new type of torture to punish the notary’s wife; they condemned her to have a fleur de lys branded on her forehead with a red-hot iron.  This sentence was not carried out because the King found the judgment too cruel, and gave his pardon.

Good for the King. The surgeon adds:

One should not believe that it is possible to restore a nose that has been completely severed.  Nevertheless, a story is told about some bandits who attacked a group of travellers one night. One of these criminals received a blow on the nose which entirely severed it, and when he went to have the wound dressed, the surgeon asked for the nose in order to sew it on. His comrades failed to find it, and instead cut off the nose of an unfortunate person who they met on the road, and brought it to the surgeon, who sewed it on. By this means it was joined to the remains of the nose of the robber, as a graft to a tree.

Wholly implausible – the alien tissue of the new nose would have been detected and attacked by the robber’s own immune system within a matter of hours – but it certainly makes a fine story.