Thomas Sydenham (1624–1689) was one of the most celebrated English physicians of the seventeenth century.  His Observationes Medicae (Medical Observations, 1676) contains a chapter which – perhaps optimistically – is entitled ‘Complete Methods of Curing Most Diseases’.  This is his remedy for conjunctivitis:

Take ten ounces of blood from the arm, and next day exhibit my common purging potion, which must be repeated a third time, interposing two days between every purge; and at night, after the operation is over, give a quieting draught of an ounce of syrup of white poppies.

Thankfully there was more to the treatment than laxatives and bleeding: eye-drops were also involved.  Although these are no antibiotics:

Take of the diluted waters of plantain, roses, and frog spawn, each an ounce; prepared tutty [zinc oxide, often used in alchemy], reduced to powder, a dram; mix them for an eye water, of which let a few drops be dropped into the eyes twice every day.

If that doesn’t work, the patient is instructed to continue with the purging.  And the diet should be carefully controlled:

The patient should forbear wine, and all spirituous liquors, and all kind of food that is salt and hard of digestion, and on the intermediate days of purging, drink milk boiled with water.

Sydenham concludes with a disclaimer:

It must be observed, that bleeding and purging, though repeated with the greatest frequency, often prove ineffectual in an inflammation of the eyes…

…in which case an ounce of the syrup of white poppies, administered every night, perfects the cure without any other helps from medicine. 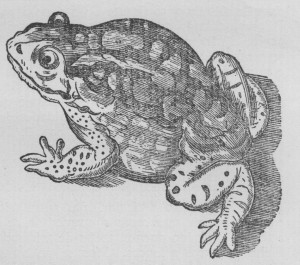 One thought on “Curing conjunctivitis with frogspawn”