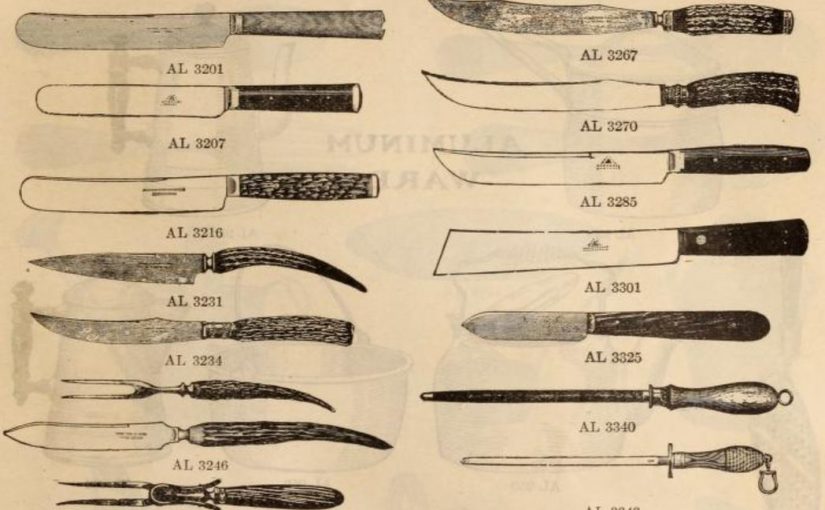 This alarming headline was attached to a letter sent to The Lancet in 1838 by Dr Congreve Selwyn, a family physician in Cheltenham. His brief communication related the story of an unfortunate accident which had taken place in his practice some 17 years earlier:

William Bishop, living at Hill Farm, Bosbury, Herefordshire, aged four years at the time of the accident (Sept. 1821), was eating his dinner, his plate being on a kitchen chair; near him was another chair; he placed a foot on a bar of each chair; the chairs receded from each other, in consequence of the motion given to them while his limbs were extended.

Easily done, especially on a tiled floor; I remember coming to grief in exactly the same manner more than once as a child.

He fell, and the knife entered in the following manner. It entered in a direction nearly horizontal to the depth of three inches and a quarter, entering the right orbit, immediately beneath the superciliary ridge…

The superciliary ridge (usually known today as the supraorbital ridge) is a bony ridge just above the eye socket, level with the eyebrow.

…and penetrating…the substance of the brain, injuring in its course the optic nerve, and the levator palpebrae muscle, or the motor filament supplying it.

The levator palpebrae superioris is a muscle which lifts the upper eyelid.

The father of the boy, at the time of the accident, told me that it required all his force to dislodge the knife from its situation. It was a common cheese-knife, about four and a quarter inches long in the blade, and averaging three-quarters of an inch broad.

The haemorrhage was very slight.

That’s something, at least, although loss of blood is rarely the primary concern in eye injuries.

After removal of the knife some portion of brain protruded; more was also discharged on the eighth day after the injury. He did not sleep for a fortnight after the accident, and was delirious during night. The treatment consisted in low diet; little or no medical treatment, and the application of strips of adhesive plaster to the wound, which was entirely healed in six weeks.

Pretty much all that could be done at this date; it is probably for the best that no surgical intervention was attempted.

The present state of the eye shows the globe to be sound and healthy in structure, though less prominent than the other. Its muscular actions are all correctly performed excepting that of the levator palpebrae superioris.

It sounds promising that the eye was ‘sound and healthy in structure’, but that turns out to be cruelly misleading.

The vision is entirely lost in that eye. The pupil is dilated, and wholly insensible to the stimulus of light. As regards the present state of mind, all the senses are perfect, excepting the vision of the injured eye. The memory is very defective. He is incapable of applying to any pursuit requiring mental activity. His disposition is irritable, especially after indulging in liquor, or after any unusual stimulus.

I wondered at first what on earth a four-year-old was doing ‘indulging in liquor’, but of course this case report was written two decades later, when the patient was at least 24.

He has occasional pain on the injured side of the forehead, and has once since had typhus fever. His bodily health is now good, and he has the free use of the superior and inferior extremities.

By and large, a happy ending, given the seriousness of the original injury. But the effects on the young man’s intellect and personality were evidently profound.

He may, in fact, have undergone an unintentional lobotomy. Many years later, in 1946, the American neurologist Walter Freeman devised a new procedure intended to treat psychiatric patients with serious mental disturbances. Transorbital lobotomy was designed to be simple enough to be performed in mental institutions that lacked sophisticated operating facilities, and entailed inserting a sharp instrument through the eye sockets. This was tapped firmly with a hammer to break through the thin layer of bone to the front part of the brain, and destroy an area of the prefrontal cortex.

Though sometimes successful in its primary aim, the procedure often had dreadful consequences for the patient, turning them into emotionless zombies or exacerbating their behavioural problems. The description of the injury – the entry point of the knife, and the consequences for his intellect – makes it sound very much as if William Bishop was an unfortunate pioneer of this now-discredited psychiatric treatment.