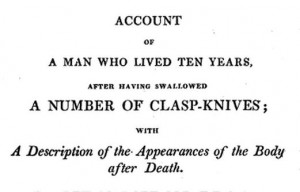 Compulsive swallowers have always featured heavily in medical literature.  There are numerous cases in 19th-century journals – but most of the individuals concerned were obviously suffering from some kind of mental illness.  This, from the Medico-Chirurgical Transactions for 1823, is the first I’ve come across in which the patient was swallowing knives for a laugh.

In the month of June 1799, John Cummings, an American sailor, about twenty-three years of age, being with his ship on the coast of France, and having gone on shore with some of his shipmates, about two miles from the town of Havre de Grace, he and his party directed their course towards a tent, which they saw in a field, with a crowd of people round it. Being told that a play was acting there, they entered, and found in the tent a mountebank, who was entertaining the audience by pretending to swallow claspknives. Having returned on board, and one of the party having related to the ship’s company the story of the knives, Cummings, after drinking freely, boasted that he could swallow knives as well as the Frenchman.

Not a particularly wise boast, and his comrades challenged him to prove it.  Eager not to disappoint them, he put his penknife in his mouth and swallowed it, washing it down with more booze.

The spectators, however, were not satisfied with one experiment, and asked the operator “whether he could swallow more?”; his answer was, “all the knives on board the ship”, upon which, three knives were immediately produced, which were swallowed in the same way as the former and “by this bold attempt of a drunken man,” (to use his own expressions) “the company was well entertained for that night.”

Actions have consequences, as every sailor should know, and when foreign objects are ingested the consequences usually come within twelve hours:

The next morning he had a motion, which presented nothing extraordinary; and in the afternoon he had another, with which he passed one knife, which however was not the one that he had swallowed the first. The next day he passed two knives at once, one of which was the first, which he had missed the day before. The fourth never came away, to his knowledge, and he never felt any inconvenience from it.

So that’s all right then.

After this great performance, he thought no more of swallowing knives for the space of six years. In the month of March 1805, being then at Boston, in America, he was one day tempted, while drinking with a party of sailors, to boast of his former exploits, adding, that he was the same man still, and ready to repeat his performance; upon which, a small knife was produced, which he instantly swallowed. In the course of that evening he swallowed five more. The next morning crowds of visitors came to see him; and in the course of that day he was induced to swallow eight knives more, making in all fourteen.

It seems to safe to assume at this point that Mr Cummins was not – ahem – the sharpest knife in the drawer.

This time, however, he paid dearly for his frolic; for he was seized the next morning with constant vomiting, and pain at his stomach, which made it necessary to carry him to Charleston hospital, where, as he expresses it, “betwixt that period and the 28th of the following month, he was safely delivered of his cargo.”

No doubt this was a common naval euphemism of the time rather than an original bon mot; but it made me laugh.

Having ‘emptied the hold’, Cummins sailed for France.  But on the return journey his ship was intercepted by HMS Isis, and he was pressganged into service with the Royal Navy.

One day, while at Spithead, where the ship lay some time, having got drunk, and, as  usual, renewed the topic of his former follies, he was once more challenged to repeat the experiment, and again complied, “disdaining,” as he says, “to be worse than his word.” This took place on the 4th of December 1805, and in the course of that night he swallowed five knives. On the next morning the ship’s company having expressed a great desire to see him repeat the performance, he complied with his usual readiness, and “by the encouragement of the people, and the assistance of good grog,” he swallowed that day, as he distinctly recollects, nine clasp knives, some of which were very large and he was afterwards assured, by the spectators, that he had swallowed four more, which, however, he declares he knew nothing about, being, no doubt, at this period of the business, too much intoxicated to have any recollection of what was passing.

This, however, is the last performance we have to record; it made a total of at least thirty-five knives, swallowed at different times, and we shall see that it was this last attempt which ultimately put an end to his existence.

Feeling like death, Cummins applied to the ship’s surgeon.  The laxatives he was given had no effect at first:

At last, about three months afterwards, having taken a quantity of oil, he felt the knives (as he expressed it) “dropping down his bowels”, after which, though he does not mention their being actually discharged, he became easier, and continued so till the 4th of June following (1806), when he vomited one side of the handle of a knife, which was recognized by one of the crew to whom it had belonged.

And who presumably was not eager to recover it.

In the month of November of the same year, he passed several fragments of knives, and some more in February 1807. In June of the same year, he was discharged from his ship as incurable; immediately after which, he came to London, where he became a patient of Dr. Babington, in Guy’s hospital.

The doctors did not believe his story and discharged him.  His health improved, and it was not until September 1808 that he reappeared:

He now became a patient of Dr. Curry, under whose care he remained, gradually and miserably sinking under his sufferings, till March 1809, when he died, in a state of extreme emaciation.

Even during this final illness, the doctors treating him refused to believe that he had swallowed more than thirty knives, until…

Dr. Babington having one day examined him, conjointly with Sir Astley Cooper, these gentlemen concluded, from a minute inquiry into all the circumstances of the case, and especially from the deep black colour of his alvine evacuations, that there really was an accumulation of ferruginous matter in his organs of digestion. And this was fully confirmed soon afterwards, by Mr. Lucas, one of the surgeons of the hospital, who, by introducing his finger into the rectum, distinctly felt in it a portion of a knife, which appeared to lie across the intestine, but which he could not extract, on account of the intense pain which the patient expressed on his attempting to grasp it.

The doctors tried to dissolve the knives (or at least blunt their edges) with nitric and sulphuric acids, a measure which must have caused much more harm than good.

After the death of their patient, the physicians dissected the body.

Throughout the cavity of the abdomen, a blackish ferruginous tinge prevailed, which was also observable in the hepatic system. On examining the intestines, one of the blades, and one of the back springs, were actually found in them, both so situated that their expulsion from the body was obviously impossible. The latter of these, about 4.25 inches long, had literally transfixed the colon opposite the left kidney, and projected into the cavity of the abdomen; while another was found stretching across the rectum, with one of its extremities actually filed in the muscular parietes of the pelvis… The stomach, viewed externally, bore evident marks of altered structure. It was not examined internally at this time, but was opened soon afterwards, in the presence of Sir Astley Cooper, and Mr. Smith, surgeon of the Bristol infirmary, who happened to be present at that moment, when a great many portions of blades, knife-springs, and handles, were found in it… These fragments were between 30 and 40 in number, 13 or 14 of them being evidently the remains of blades; some of which were remarkably corroded, and prodigiously reduced in size, while others were comparatively in a state of tolerable preservation.

After examining the stomach, the doctors concluded that

when the stomach was able to expel them quickly, they passed through the intestines, inclosed within their handles, and therefore comparatively harmless; while at a later period, the knives were detained in the stomach till the handles, which were mostly of horn, had been dissolved, or at least too much reduced to afford any protection against the metallic part.

And the moral of the story: the correct answer to the question “Can you swallow more knives?” is never “All the knives aboard the ship.”