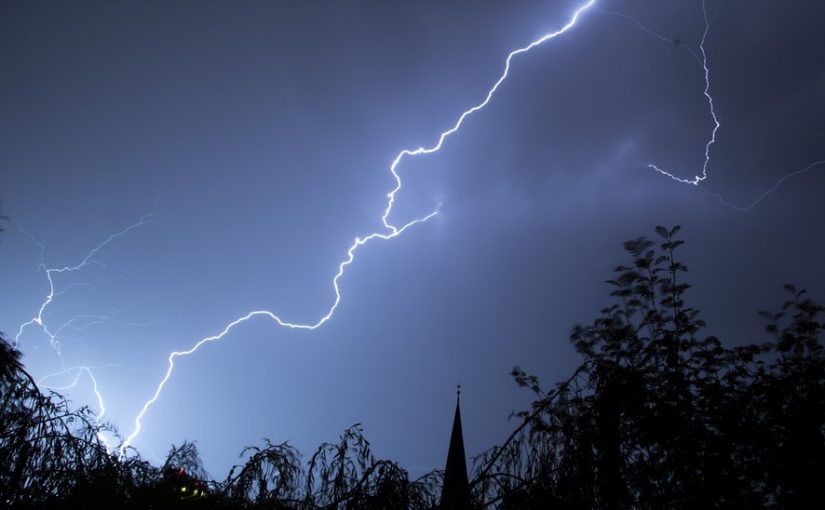 Last night was a dramatic one in London, with electrical storms and flash floods. It’s been a bad year for deaths by lightning: Bangladesh has seen a near-record 261 fatalities so far in 2016, and there have been an unusual number of deaths and injuries in Europe. This week is Lightning Safety Awareness Week in the USA, where over 50 people are killed by thunderbolts every year.

By chance I recently came across this article from a 1755 edition of the Philosophical Transactions about the death of Professor George Richman, a natural philosopher and member of the Imperial Academy of Sciences in St Petersburg in Russia. Inspired by the experiments of Benjamin Franklin, Richman became fascinated by lightning and set up apparatus at his own home in order to investigate it:

In order…to demonstrate what he might advance in this discourse with the greater certainty, he neglected no opportunity, upon the appearance of a thunder-cloud, diligently to discover its strength. Bars were standing for this purpose always upon the roof of the house. These received the electrical power of the clouds, and imparted it to certain chains fastened to them; by which it was conducted into one of his rooms, where his apparatus was.

The warning ‘don’t try this at home’ is, I hope, unnecessary. Conducting several million volts of electricity into one of the rooms of your house has certain hazards.

He was attending the usual meeting of the Academy the 26th of July 1773, a little before noon, when it thundered at a pretty distance, the sky being clear, and the sun shining. Upon this he hastened home, in hopes of confirming his former observations, or possibly enabling himself to make new ones. The engraver Sokolow, who had the care of his future treatise, accompanied him, to make himself the better acquainted with the chief circumstances of the electrical experiment, in order to be thereby enabled to represent it more justly on a copper-plate.

The professor showed the engraver his apparatus, which included an ‘expositor’ – probably a primitive electrometer, an instrument to measure the electric charge. When they arrived it was giving a low reading, indicating that the lightning conductor on his roof was receiving little charge from the atmosphere.

In the meantime the misfortune happened, about half an hour after noon, which cost Professor Richman his life. A thick cloud, that came from the northeast, and seemed to float very low in the air, was taken notice of by people walking the street; and these affirm, that they could plainly see, upon the subsequent flash of lightning, and peal of thunder, a quantity of vaporous matter issue from it, which diffused itself in the circumjacent space. It was such a thunder-clap, as has hardly been remembered at Petersburg. The serene weather continued afterwards just as before.

This was an unusually sudden and violent thunderstorm – there was apparently not a drop of rain.

The neighbours declare, that they saw through their windows a vapour, in different rays, dart along the whole extent of the street; and that wherever it touched the ground, it emitted everywhere sparks; which is not incredible; for besides, there were people, who, walking along between these rays of vapour, were quite stunned, and some beat to the ground, but they speedily recovered themselves. A sentinel in the Great Perspective, not far from Mr. Richman’s dwelling, which stands at the corner of the said Perspective, was cast some paces from his sentry-box, but without receiving any injury.

Unluckily for Professor Richman, the lightning bolt’s aim was unerring.

It is not therefore to be doubted, but that this very thundercloud, or its electrical discharge, must have struck the iron bars, which were upon Mr. Richman’s house-top; by which a great part of the electric force was conducted, by means of the chains, to his electrical expositor; and thus it could not fail of having the melancholy effect, the parallel of which has not been known.

The engraver, Sokolow, survived the ensuing fireball. This is his account of it:

Mr. Richman inclined his head towards the expositor, to observe what degree of force it would have; and whilst he stood in that bent posture, a great white and bluish fire appeared between the electrical expositor and Mr. Richman’s head. At the same time arose a sort of stream, or vapour, which entirely numbed the engraver, and made him sink down upon the ground; so that he cannot remember to have heard the loud thunder-clap.

The apparatus was destroyed: part of it, a large glass flask containing brass filings, was blown into smithereens. Sokolow was stunned and did not see what happened to Richman.

As soon as he had recovered his senses, he got up, and ran out of the house, acquainting every one, whom he met in the street, that the thunder had struck into Mr. Richman’s house. On the other side, as soon as Mrs. Richman heard the very loud stroke of thunder, she came hastening into the chamber, in which she conjectured she should see the bad consequences. She found her husband past sensation, sitting upon a chest, which happened to be placed behind him, and leaning against the wall; which situation must have been occasioned by his falling back upon receiving the electrical blow. He was no sooner struck, but killed. There were not the least appearances of life. A sulphurous smell, not unlike that which is caused by the explosion of gun-powder, diffused itself through the whole house.

The police were called, and a doctor, who attempted to revive the motionless Richman.

They opened a vein of the breathless body twice, but no blood followed. They endeavoured to recover sensation by violent chafing, but in vain. Upon turning the corpse topsy-turvy, during the rubbing, an inconsiderable quantity of blood fell out of the mouth. There appeared a red spot on the forehead, from which spirted some drops of blood through the pores, without wounding the skin. The shoe belonging to the left foot was burst open. Uncovering the foot at that place, they found a blue mark, by which it is concluded, that the electrical force of the thunder having forced into the head, made its way out again at the foot. Upon the body, particularly on the left side, were several red, and blue spots, resembling leather, shrunk by being burnt. Many more blue spots were afterwards visible over the whole body, and in particular on the back., That upon the forehead changed to a brownish-red. The hair of his head was not singed, notwithstanding the spot touched some of it. As for the wig, the deceased had taken it off. In the place, where the shoe was unript, the stocking was entire; as was his coat everywhere, the waistcoat being only singed on the fore-flap.

A post-mortem was performed. The findings, like the description of the body, are typical of such injuries.

When the body was opened the next day, twenty-four hours afterwards, the cranium was very entire, having no fissure or cross-opening; the brain as sound as possibly it could; the transparent pellicles of the windpipe were excessively tender, gave way, and rent easily. There was some extravasated blood in it, as likewise in the cavities below the lungs; those by the breast being quite sound; and not damaged, but those towards the back of a brownish black colour, and filled with more of the above blood; otherwise none of the entrails were touched: the throat, glands, and the thin intestines were all inflamed. The singed leather-colour’d spots penetrated the skin only.

Thunderstorms are far more likely in summer, when higher temperatures produce the necessary humidity. The article concludes with unfortunate evidence that this was a particularly warm summer in St Petersburg:

Twice twenty-four hours being elapsed, the body was so far corrupted, that it was with difficulty they got it in a coffin.

4 thoughts on “Bolt from the blue”