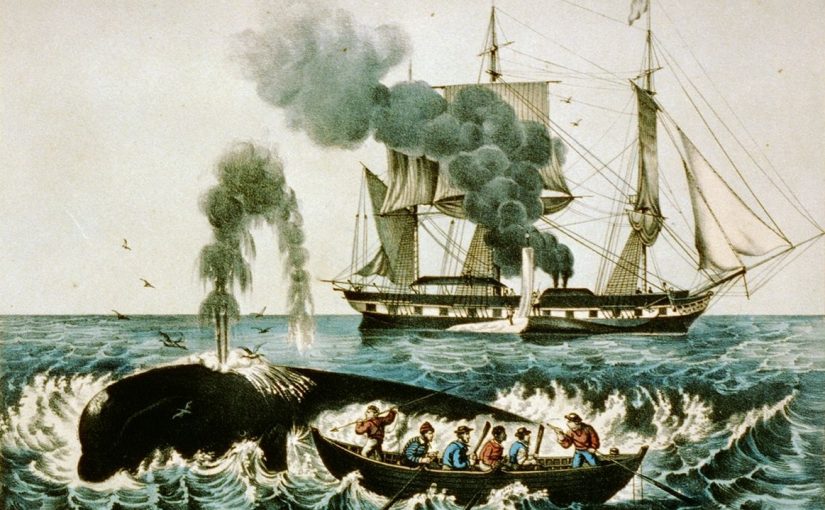 The Scalpel was unlike other medical journals in that it was aimed at lay readers as well as professionals.  Its articles were conversational and avoided unnecessary technical language – and many were satirical in intent. And that’s what I thought this story was, until I looked up the details and found that they were corroborated not just by contemporary newspapers but by shipping records, which makes it rather unlikely that it’s a hoax.  The unnamed author (almost certainly Edward H. Dixon himself) was, in my view, relating a true story:

Edward T. Hinckley, of Wareham, Mass., then mate of the bark Andrews, commanded by James L. Nye, of Sandwich, Mass., sailed some two years and a half since (we find the date omitted in our minutes) from New Bedford, Mass., on a whaling voyage.

New Bedford was probably the busiest whaling port in the world at the time – and is now home to the most extensive museum collection of whaling-related artefacts. In 1850 no fewer than 87 ships set off from New Bedford on whaling expeditions.  The Andrews weighed anchor on June 3rd, the start of an voyage that would last three years.

Two days earlier a slightly smaller ship, the Ann Alexander, had set off from the same port; it became famous the following year when it was rammed and sunk by a sperm whale – a real-life Moby Dick!  (The parallel is not entirely fanciful: Melville’s masterpiece was about to be published, and in a contemporary letter the author commented that it was ‘really & truly a surprising coincidence…I wonder if my evil art has raised this monster.’)

Very few ships are known to have been sunk by whales, but on its voyage the Andrews would also have an unfortunate encounter with one.

When off the Galapagos Islands, one of the hands, who had shown a mutinous disposition, attacked Captain Nye with some violence, in consequence of a reproof given him for disobedience. In the scuffle which ensued, a wound was inflicted with a knife, commencing at the angle of the jaw, and dividing the skin and superficial tissues of the left side of the neck, down to the middle of the clavicle, under which the point of the knife went.

An ugly-sounding wound. The knife opened up a gash down the side of the neck, from the hinge of the jaw to the collarbone.

It was done in broad day, in presence of the greater part of the crew; and Mr. Hinckley, the mate, being so near, that he was at that moment rushing to the captain’s assistance. Instantly seizing the villain, and handing him over to the crew, the knife either fell or was drawn by someone present, and a frightful gush of dark blood welled up from the wound, as the captain fell upon the deck.

The ‘dark blood’ was a sign that a vein, rather than an artery, had been injured – still serious, but less immediately life-threatening.

Mr. Hinckley immediately thrust his fingers into the wound, and endeavoured to catch the bleeding vessel; with the thumb against the clavicle, as a point of action, and gripping, as he expressed it to me, “all between,” he found the bleeding nearly cease. The whole affair was so sudden, that Mr. Hinckley stated to me, he was completely at a loss what step to take.

An alarming position to be in.

Such had been the violence of the haemorrhage, a space on the deck fully as large as a barrel head, being covered with blood in a few seconds, that it was evident from that and the consequent faintness, that the captain would instantly die, should he remove his fingers from the bleeding vessel.

This was self-evidently a major blood vessel.

As Mr. H. said to me, with the simplicity and straightforward style of a seaman, “I brought to for a minute, to think over the matter. The bleeding coming upwards from under the collar-bone, and being completely concealed by it, it was plain enough that I couldn’t get at the blood-vessel, without sawing the bone in two; and this I would not like to have tried, even if I had dared to remove my fingers.”

Mr Hinckley’s fingers were so deep inside the wound that he realised they were underneath the captain’s collarbone. The bleeding had stopped for the moment, but he needed to find a way of removing his digits without the haemorrhage recurring:

“I passed them a little further downwards, still keeping up the pressure against the bone with the middle joints. I then found, my fingers passed under something running in the same course with the bone; this I slowly endeavored to draw up out of the wound, so as to see if it was not the blood-vessel. Finding it give a little, I slowly pulled it up with one finger; when I was pulling it up, the captain groaned terribly, but I went on, because I knew I could do nothing else. As soon as I could see it, I washed away the blood, and was astonished and very glad to see here were two vessels, as I supposed them to be, one behind the other: the cut was in the front one.”

A remarkably clear description which makes it possible to identify the blood vessels with reasonable confidence. The subclavian vein and its associated artery lie just underneath the clavicle, the vein in front of the artery. The subclavian artery is one of the major branches of the aorta – if it had been wounded instead it’s likely the captain would already have been dead.

“It was the full breadth of the knife, or about half an inch, and neither across nor lengthways, but about between the two, and went about half its thickness through the blood-vessel: it was smooth and blue in appearance, and the cut had stopped bleeding, as I supposed at the time, because the vessel was pressed together by being stretched across my finger.”

What would you do in such desperate circumstances? Mr Hinckley barely hesitated.

“As I had often sewed up cuts in the flesh, and knew nothing about tying blood-vessels, and supposed that was only done when they were cut in two, as in amputated limbs, I concluded to try my hand at sewing it up; so I took five little stitches; they were very near together, for the wound was certainly not half an inch wide, if so much.”

Mr  Hinckley was evidently a dab hand with a needle and thread, because this sounds ferociously difficult. Remember, he was standing on the deck of a ship having only just averted a mutiny – hardly the easiest circumstances for fine suture-work.

On inquiry of Mr. Hinckley, if he cut off the thread each time and threaded the needle again, he said Yes; but “I only cut off one end, and left the other hanging out.” This he had learned from a little book, prepared for the use of sea captains and others, when no surgeon was on board.

It sounds as if Mr Hinckley was a quick learner. He used an ‘interrupted’ suture technique – each stitch was separate from its neighbour. It was standard practice at the time to leave the threads dangling out through the wound – this allowed the surgeon to remove or tighten them, as necessary.

Mr. H. continued: “I twisted the ends together loosely, so as to make one large one, and let it hang out of the wound over the bone; then I closed all up with stitches and plasters. On the fourteenth day I found the strings loose in the wound, from which matter had freely come: it healed up like any other cut.”

And that was that: a complete recovery. But alas the captain did not live for long after this near-fatal incident:

Poor Captain Nye finally met a sad fate; he was drowned on the destruction of his boat by an enraged whale.

It’s difficult to work out precisely what happened.  Captain Nye and two of his men were indeed killed by a whale on December 29th 1852, but the ship is recorded as having returned to port on May 3rd 1853, minus a captain but carrying 909 barrels of sperm-oil. The Andrews then apparently went back to sea, and was ‘lost on the Galapagos’ some time later that year. Of Mr Hinckley’s subsequent fate nothing is known, although I suspect he left the ship in May 1853, since his account of the operation in The Scalpel appeared some months later.

The article concludes in grandiose manner:

We may be mistaken in our views of its importance, but we think that in the estimation of our professional readers we have placed upon record one of the most extraordinary circumstances in the whole history of Surgery.

Dr Dixon has a point. Suturing veins and arteries was a notoriously difficult thing to do, and it was not until the beginning of the twentieth century that a surgeon succeeded in joining the two ends of a completely severed vessel. A specialist at any of the great hospitals of London, New York or Paris would have been proud of the result achieved by this untutored seaman on a whaling ship in the Pacific. 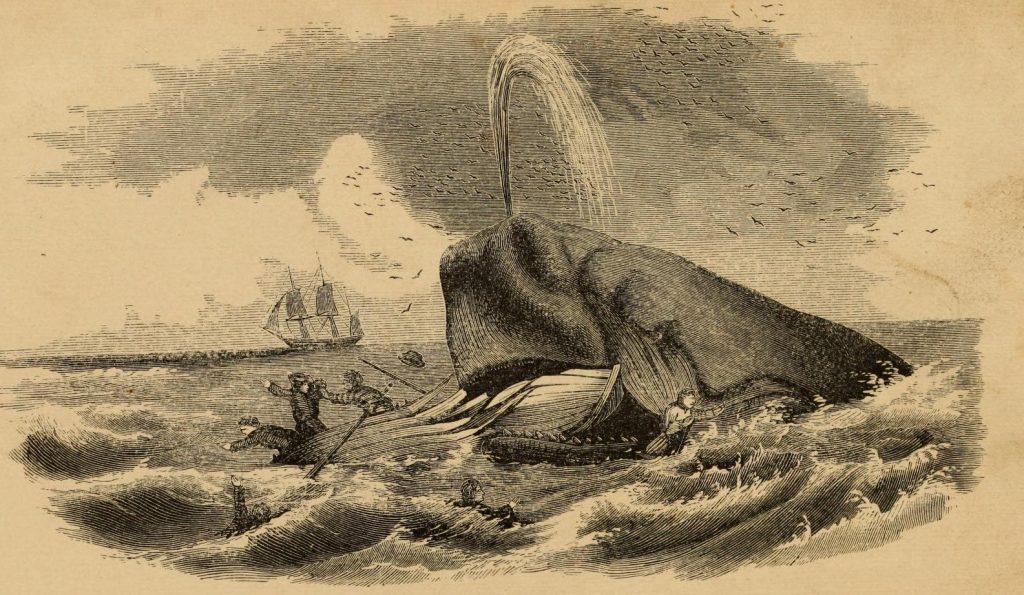