More strange news from the Philosophical Transactions, the venerable journal of the Royal Society. This brief report was contributed in 1720 by Abraham Vater, a German anatomist who was a particular authority on the digestive tract (the ampulla of Vater, a structure at the meeting of the common bile duct and pancreatic duct, is named after him). It’s quite a celebrated case – one of the earliest of its type in the literature. The original was in Latin; this text is taken from a later translation.

George Deppe, a native of Halberstadt, aged 34, in consequence of a wound received in the left hypochondrium, in the battle of Ramillies, in 1706, has ever since (viz. for 14 years) had a large portion of the colon, a span in length, hanging out of the abdomen.

The Battle of Ramillies was an engagement fought in Belgium during the War of the Spanish Succession. I’m always fascinated by the pan-European nature of so many conflicts of this period – the fact that a peasant from Saxony could find himself involved in a dispute about the Spanish throne, well over a thousand miles away.

A span, defined as the width of a human hand, is about nine inches – quite a substantial amount of one’s gut to have hanging out of the body for 14 years.

The wounded and protruded intestine is inverted; and being united in the middle, it exhibits two orifices, the upper orifice communicating with the small intestines, and discharging the alvine faeces, and the lower orifice with the rectum, so that a clyster injected per anum is returned by it.

A remarkable state of affairs. The upper part of the intestine was a fistula, an opening communicating with the outside world, so that part-digested bowel contents were egested through it. A ‘clyster’ is an enema – liquids injected through the anus came out again at the injured part of the colon.

In the inner surface, now turned outwards, are seen a vast number of small glands, like warts, of a whitish grey colour, exhibiting a most curious appearance, and bleeding on being rubbed or touched roughly.

These were, indeed, probably the intestinal glands, which line the internal surface of the bowel.

The protruded portion of the intestine is never wholly drawn into the abdomen; a part of it however retires when the stomach is empty; on the contrary, when the stomach is full, and especially when the person holds his breath, it is thrust out to a greater extent.

This person uses, without inconvenience, the coldest water, and in winter-time even snow and ice mixed together, for cleansing the protruded gut; which moreover bears exposure to the coldest air; except that it is thereby contracted and hardened, and rendered of a somewhat paler colour.

It is pretty amazing that he did not get a serious infection – a permanent wound of that kind is an invitation for all sorts of unpleasant microorganisms to take up residence. Regularly cleaning the ‘protruded gut’ was probably a sensible thing to do.

He can eat all sorts of food; but raw fruit and garden-stuff pass off undigested; and this is the case also with broths that are taken without solid food.

‘Garden-stuff’ means green vegetables. Both fruit and vegetables contain large amounts of cellulose, a complex carbohydrate which humans do not break down terribly efficiently (unlike ruminants such as cows, which have digestive tracts adapted to do so). Digestion of cellulose is mainly accomplished by microorganisms in the colon, which explains why vegetables consumed by this patient reappeared almost unchanged. Similarly, much of the water we consume is absorbed in the colon and rectum, so it seems quite likely that broths and other liquid foods would be poorly digested.

Appended to the original report is an engraving of George Deppe’s injury. It’s quite a sight. 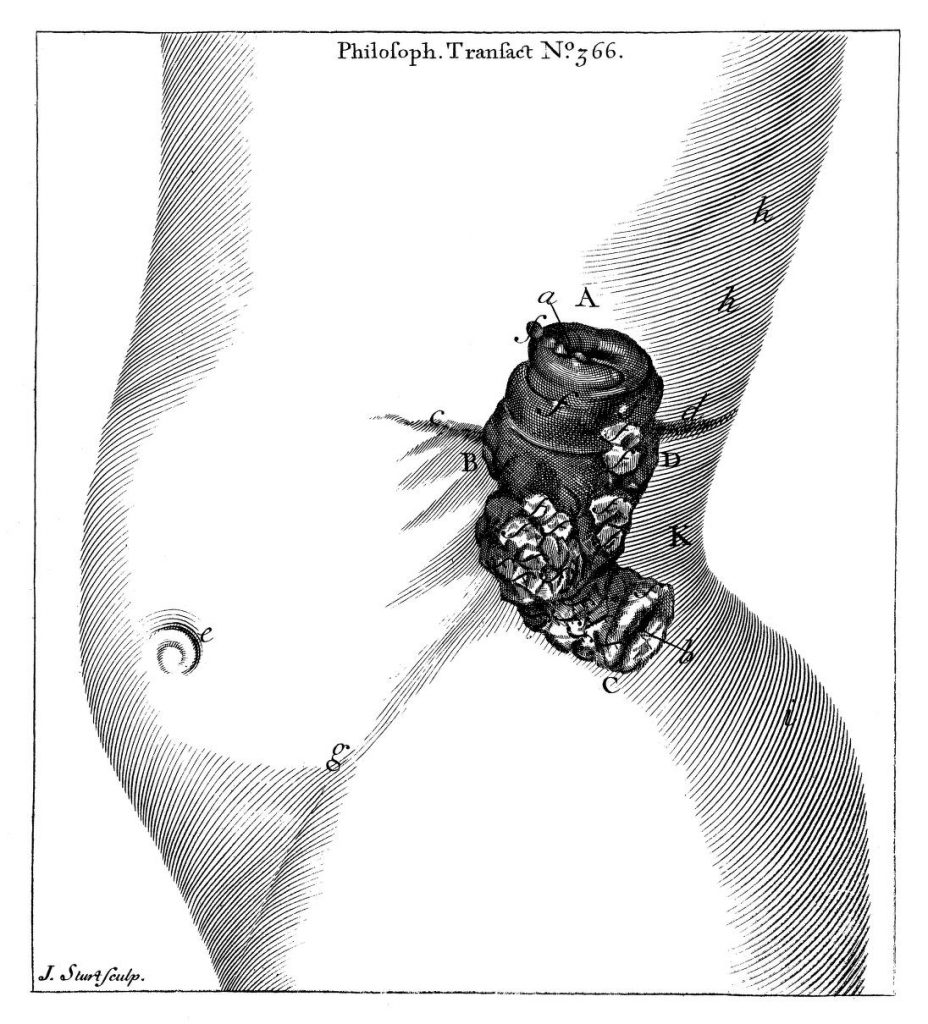