This case was published in the Report of the Army Medical Department for 1873, an annual publication produced by the medics of the British military. Browsing its pages, my first reaction was astonishment at the sheer size of the British Army at the height of Empire, and how many parts of the world they were stationed in: much of Africa, the Caribbean, all over India, the Mediterranean, Canada, China… the list goes on and on.

An appendix of the 1873 report was devoted to fatalities sustained during the Third Anglo-Ashanti War, a conflict between the British and the great Ashanti Empire in what is now Ghana. It is written by Joseph Fleming, a military surgeon who spent his entire career with the army, serving in Afghanistan and Sudan as well as in what he and his comrades knew as the British Gold Coast.

Captain H. V. B—, Royal Navy, aged about 40, service not stated, arrived on board the hospital ship “Victor Emmanuel” from the front on the evening of the 24th January, in a state of great prostration from remittent fever.

HMS Victor Emmanuel had been launched two decades earlier as a ship of the line, but was refitted for use as a hospital ship for this campaign. She was apparently ill-equipped for this use, as elsewhere in his article Mr Fleming complains about the facilities at his disposal. A ‘remittent’ fever is one that comes and goes.

It was afterwards found out that his present illness commenced with violent diarrhoea, which lasted some days, and then stopped suddenly. There is no distinct account of when he was attacked with fever, but it is stated that there was fullness and tenderness on pressure over the abdomen, especially over the region of the liver.

When he arrived on board ship, the captain was weak and spoke faintly; both his temperature and pulse were elevated. The following day his abdomen became tender and swollen and he became delirious.

Though every remedy was tried, and every attention bestowed, he expired on the morning of the 27th, apparently from the exhausting effects of some fever poison.

The cause of the man’s death was not clear, so a post-mortem was performed. The most significant findings were apparently the gall bladder, which was observed to be ‘much distended’, with obvious signs of inflammation around it, affecting the liver and spleen in particular. Given the symptoms with which he presented (vomiting, diarrhoea, fever and tachycardia), one possible diagnosis is that he was suffering from acute cholecystitis – inflammation of the gall bladder, which developed into peritonitis. But that is merely conjecture (feel free to set me straight by leaving a comment, medics).

However, that’s not all the surgeon found when he examined the captain’s body:

An old circular scar, with loss of substance, and half-an-inch in diameter, was found in the skin above the right nipple over the 4th rib, near its union with the cartilage.

What could have caused this mark? Mr Fleming had some difficulty opening the man’s ribcage, but when he did so he noticed a corresponding scar on one of the ribs – and something else, too.

A small hard heavy circular body, about half-an-inch in diameter (which, on examination, proved to be a leaden bullet), is found encysted outside the pericardium, above the right ventricle and between the origin of the pulmonary artery in front and the ascending part of the arch of the aorta behind.

A really surprising place to find a bullet: less than an inch from the heart, and sitting snugly between the two largest blood vessels in the body. Miraculously, it had not damaged any of these delicate structures. By chance, another of the surgeons on board HMS Victor Emmanuel knew how it had happened, since he witnessed the injury – which had occurred thirteen years earlier and on the other side of the globe.

It appears that Captain B— received a bullet wound of the chest at the spot indicated by the cicatrix [scar] at Taranaki, New Zealand, on the 28th of March 1860, and that there were grave doubts as to whether or not the bullet penetrated the chest, so trifling were the symptoms immediately after receipt of the injury and during treatment.

The captain had been treated and almost immediately discharged from the field hospital.

The text is accompanied by an illustration, which leaves no room for doubt about how lucky this soldier had been. 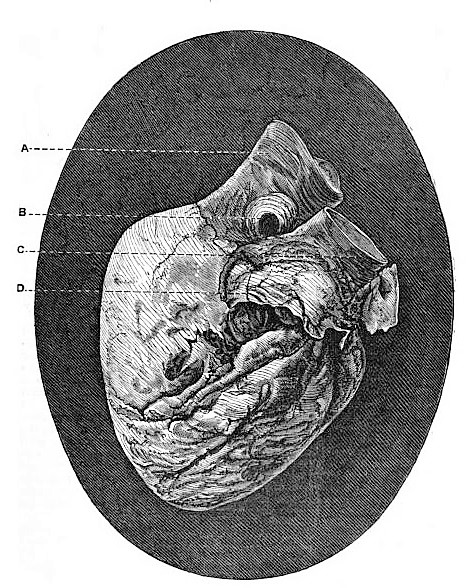 The cyst was the body’s defence mechanism against this foreign body: it had been encapsulated to isolate it from nearby tissues. Nearby the surgeon could see evidence of old inflammation, which luckily had not affected the heart or the pericardium, the membrane around it.

On opening the sac in which the bullet is lodged, some earthy matter, probably carbonate of lead, is found on its surface, and there is also another yellowish white waxy-looking substance, which is possibly broken-up bone tissue mixed with particles of lead.

Mr Fleming observes, with some justification, that the case is

one of the most extraordinary on record, from the fact that a leaden bullet had passed through the walls of the chest, breaking the 4th rib on the right side, and, without injuring the lungs, lodging on the pericardium, between the origin of the aorta and pulmonary artery, for a period of nearly 14 years, without causing dangerous symptoms, or interfering with the discharge of his duties.

After asking around, Fleming learned a little more about his patient and his mishap.

I have since casually heard that during life he was aware of the existence of a “something” in his chest, and that he used frequently to beat it with his hand, as one often does who becomes cognisant of any slight irritation beneath the sternum.

The surgeon does not speculate on the cause of the captain’s death, but he also does not suggest that it was the consequence of the bullet. And there’s no particular reason that it should have been. Soldiers often survive for decades with bullets lodged in their bodies, sometimes even the heart muscle. It is not in itself remarkable that this captain survived for so long with a chunk of lead inside his body; what makes this case so extraordinary is where the bullet ended up.