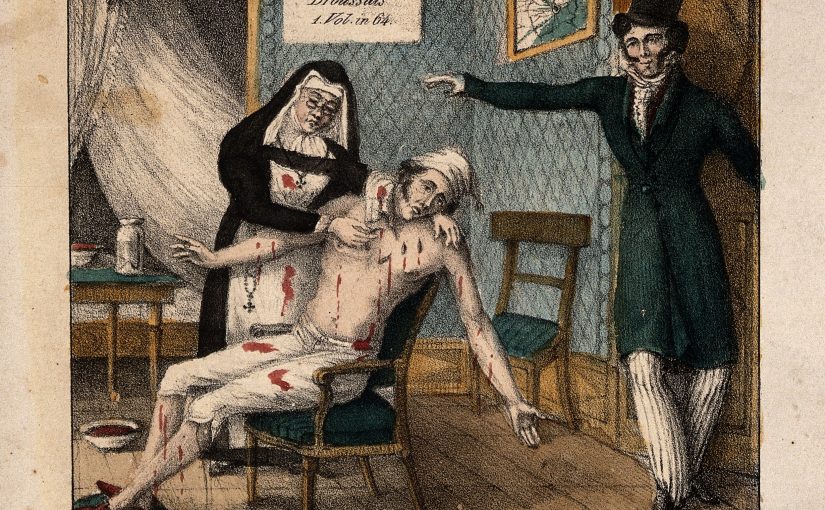 Bloodletting is one of the oldest medical treatments of all, employed for centuries in cultures all over the world. It’s also become a sort of lazy shorthand for the ignorance of our ancestors, the prime example of a useless and harmful technique that doctors persisted in using despite no good evidence for its efficacy.

Although it was largely abandoned as a therapeutic method in the early twentieth century, there are still a few indications for its use – for instance in the treatment of a condition called polycythaemia, which gives patients an abnormally high level of red blood cells. And long before it fell out of favour, physicians were debating whether bleeding was a good idea, and how much blood to take at a time. There were times when medics preferred to take quite modest amounts of blood, using leeches or a technique called scarification. At the opposite extreme, in the early nineteenth century physicians in America and France began to advocate quite drastic bloodletting. One influential figure was François-Joseph-Victor Broussais, professor at the Val de Grace military hospital in Paris, who recommended applying fifty leeches at a time. His pupil Jean-Baptiste Bouillaud went even further, taking up to three litres (5.2 pints) from a single patient.

This case, published in The Lancet in 1827, might have been influenced by the Broussais school of therapeutics. Its author, George Taylor, was a surgeon from Kingston-upon-Thames.

Goodeve, a strong muscular man, came to my house, and requested the assistant to bleed him for the relief of an oppression in his breathing, to which he had been occasionally subject. Two pints of blood were taken.

This is about twice as much as blood donors usually give in a session: a fairly large volume, but nothing dramatic. But that was just the beginning.

He soon returned to complain that his arm was painful and disposed to swell, when the bandage was removed, and a purgative administered. He returned home and threw himself upon the bed; but the swelling and pain increasing, he again came to my house, when I saw him; the arm was enlarged, painful, and hot.

This sounds much like an infection, and may well have been one. Antiseptics were still some decades away, so the lancet used in the bloodletting would not have been sterile. Dr Taylor decided that yet more bleeding was the answer.

I ordered him thirty leeches, and desired, upon their falling off, that the whole arm might be enveloped by a cold poultice.

A leech will feed until sated, and then drop off when it has finished. The doctor then gave his patient a purgative, a medicine intended to open the bowels.

At night I was summoned in great haste; I found him writhing about in the most intolerable agony, his pulse too quick to be counted, his tongue dry and brown, and the arm enlarged to thrice its natural size, the swelling extending from the puncture in the vein to the scapula on the one side, and to the clavicle on the other, the whole surface looking polished, and in some spots black.

This definitely sounds like an infection, the black spots possible signs of necrosis (tissue death).

Under these desperate circumstances, I thought myself justified in bleeding him largely; I therefore tied up the left arm, and took away as much blood as was required to produce fainting, by which he was completely relieved; on the following morning the arm was greatly reduced in size, free from pain, and altogether in so very satisfactory a state, that in a few days he was enabled to leave his room.

If it was an infection, he had a lucky escape. In other circumstances sepsis might have killed him within hours.

Upon measuring, I found that I had taken away six pints, which, with the two abstracted by the assistant, furnished the startling quantity of “one gallon of blood within twelve hours,” and I have no doubt that it saved his life.

A questionable assertion. If his figures are accurate, the doctor had taken an astonishing amount of blood: 8 pints or 4.5 litres, some 80% of the total in the average human body. Not even Benjamin Rush – the leading American advocate of bloodletting – ever claimed to have taken so much in so short a time.

This figure is so high, in fact, that I doubt whether it is even possible to survive such drastic blood loss. If you have any views on the subject, please feel free to leave a comment below.

Image at top of page: