Bright sunlight has long been known to be bad for the eyes.  Prolonged exposure to UV radiation can cause a range of problems, including cataracts and cancers.  In 1802 a Dr Whyte, a physician with long experience of practice in Egypt and other hot climates, wrote an article for The Medical and Physical Journal about the dangers of sunlight in such parts of the world:

That exposure of the naked eye to the intense heat and vivid rays of a nearly vertical sun, should in some cases occasion an expansion of the humours and dilatation of the vessels of that delicate organ, is in the nature of things not to be doubted.

Sensibly enough, he advises those not used to such conditions to take particular care.

Where the constitution is naturally delicate, where it has been formed in another climate, and is not yet sufficiently assimilated to the new one, such expansion and dilatation will, on the requisite exposure, more certainly ensue.  To guard against such exposure constitutes therefore a material part of ocular prophylaxis. It is to be effected by shading the eyes from the influence of the vertical ray, by means of broad brimmed hats, long vizored helmets, or what would answer best of all, the tamata of Taheite, a garland composed of palm leaves with a plated projecting front piece; this of all coiffures is the most eminently suitable, because it does not debilitate the head by excessive heat, as do the ponderous helmets of European soldiers, or the equally ponderous turbans of pious Musselmen.

Fair enough, but I seem to have mislaid my Tahitian tamata.  Couldn’t I just wear my usual cocked hat?

Neither the cocked hat of modern Europe, nor the mouchoir so generally worn by the lower classes of the French and Spaniards, as well at home as in their American possessions; nor the turban of the swarthy inhabitants of Africa or Asia, afford any shade or protection to the eyes.  Accordingly, all these enumerated classes, in every variety of climate and soil, are exceedingly liable to ocular inflammations, and to their remote consequences, specks and cataracts.

I am acquainted at present with a case of this kind, which was induced by the patient indulging himself with an afternoon’s nap, in the open air, on the rock of Gibraltar, laying on his back, and with his eye-lids considerably open.

Who sleeps with their eyes open? Don’t tell Dr Whyte, but I think this patient might have been in a drunken stupor.

This man recovered without having had recourse to medical assistance.  By avoiding for some time the stimulus of light, or, more correctly speaking, the expansive power of heat, the humors insensibly collapsed, and the tunics resumed their original and healthy tone.

This sounds an ideal outcome: perfect recovery without medical intervention.  But no! Dr Whyte thinks he could have helped:

Had this person, however, been a patient of mine, I would have assisted the slow progress of Nature, by keeping the ball of the eye constantly moistened with a cloth or rag dipped in cold water, or some gently astringent collyrium [eyewash].  I would have also touched the ball of the eye, morning and evening, or oftener, with some astringent and stimulating tincture, as that of cinchona, or of opium;

or, to supersede every other remedy, and strike at once to the root of the disease, I 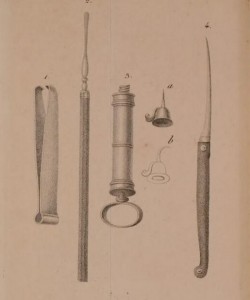 would have pierced through the tunics with a couching needle, and entering the posterior chamber of the aqueous humor by an incision parallel to and behind the iris, permitted an outlet proportioned to the existing expansion.  No danger need be apprehended from this operation; it is even in this manner I am accustomed to extract the cataract; It is a mode that possesses many advantages. I have performed it frequently, ever with impunity, and often with success.

This is hard to believe, since physicians had no form of antisepsis in 1802.  It is also difficult to express quite how reckless an undertaking this would be, especially on a patient who might not need any treatment.  But wait, there’s more: 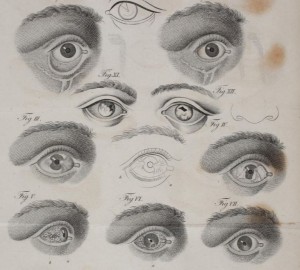 I may likewise add, that when leeches can be procured we should do well to apply them in some cases, repeating them as circumstances may require, and applying them as near as possible to the seat of the disease.  In such cases, when leeches cannot be obtained, we may open the jugular vein, or, still better, the temporal artery.

This does seem a trifle disproportionate.

It is almost unnecessary to add, that the state of the bowels must be likewise attended to.

Took the words right out of my mouth.