Towards the end of May 1797 Miss A.B., a young woman from the Isle of Man, was afflicted by a particularly tenacious bout of hiccups.  It sounded

like the panting which occurs after violent exercise, or like an aspirate pronunciation of the interjection Ha!  The pulse, respiration and speech were not in the least disturbed….It was very loud at times, and in general was but too audible in all parts of a common-sized room.

The hiccups stopped when she went to sleep, and on one occasion – briefly – when she was given a fright.  She was otherwise in good health, and there was no clue as to what might have caused the outbreak, although her physician, Dr Scott, noted:

It will be right to remark, that for a year previous to the coming on of this strange malady, the lady had lived very entirely on a vegetable diet, taking occasionally a little elder wine.

At a loss, Dr Scott consulted his father and a colleague, Dr Quillin.  They prescribed blisters to her throat, breast and between the shoulders.  Blistering, a common treatment at this date, involved using a caustic agent on the patient’s skin in order to provoke the formation of a blister: it was thought that this would draw toxins away from the diseased parts of the body.  [It was still in use a century ago, when the surgeon Francis de Havilland Hall wrote an angry letter to the British Medical Journal defending the technique against a colleague who had described it as ‘barbarous and antiquated’.]

But that was not all: they recommended that she abandon her vegetarian diet, start drinking wine and take regular exercise on horseback.  But alas!

The patient, after making use of various means, was not in the smallest degree relieved; and being anxious to try the effect of change of air, and to obtain the advice of the faculty in England, repaired thither in August: Her health otherwise was much in its usual state.

Two eminent physicians were consulted in Liverpool, without result.  But the hiccups stopped spontaneously when she went to stay with friends in Suffolk.  Her relief, however, was short-lived:

In the subsequent December, the lady returned to the Isle of Mann, where she remained well till May 1800, when she was attacked with her old malady, in all its circumstances exactly as before, only perhaps, on the whole, not so violent.

This time Dr Scott tried a new drug, sulphur.  He was pleased with the results, but insisted on further measures.

She was enjoined not to speak, — to remain in bed a day or two, — to have the room dark, — and, in short, to give as little irritation to the system in general, and the lungs in particular, as possible.

This brought about a happy end to the case; but beware!  Avoid walnuts.

The patient is at present (August 1st 1802) very well, but has had, very rarely indeed, some returns, seldom, however, for a longer period than half an hour, very mild, and gradually declining, not preceded by any particular cause.  One evening it occurred after some walnuts had been eaten, but was almost instantly stopped by violently pressing the wrists. 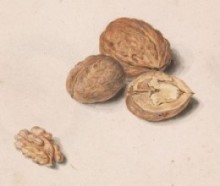 One thought on “A case of hiccups”